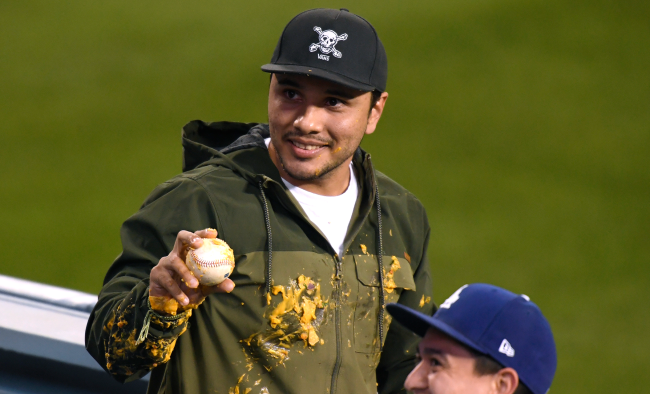 One Dodgers fan who was in attendance at Wednesday night’s game against the Colorado Rockies ended up having an evening that he will not soon forget.

For you see, in the third inning of the game, Dodgers’ star third baseman Justin Turner stepped up to the dish against Rockies pitcher Jon Gray and with a 2-1 count absolutely launched a home run to left-center field tacking another run on to his team’s lead.

The fan in question, sitting in the left-center field stands positioned himself perfectly as the ball was coming down and made a sweet basket catch of the home run ball.

Unfortunately, he didn’t protect his order of nachos and SPLASH! he ended up covered in nacho cheese.

Let's get weird. Somebody eats the cheese off nacho man.

Turner, who finished the game 2-for-4 with 2 RBI in the Dodgers’ 4 to 2 victory, heard about what happened to the fan and ended up sending him a new order of nachos and even provided him with a sparkling clean Dodgers sweatshirt from the team store.

SportsNet LA caught up with the fan for an interview.

Nacho guy said JT sent him new nachos but we couldn't let him sit through the rest of the game in a cheesy jacket. 🤝🧀 #Dodgers pic.twitter.com/SMsKddxKsr

After the game Turner confirmed it was indeed him who sent the fan a new order of nachos.

“I saw it kinda splatter up and when they went to look at it and showed the replay, I saw that it was nachos,” admitted Turner. “I felt bad. I’m sure it wasn’t a two-dollar tray of nachos, so I wanted to replace it for the guy.”

When asked about the nice gesture by Turner, Dodgers manager Dave Roberts said, “I know Justin will trade a homer for buying a guy some nachos. We can always replace nachos.”

So the fan ended his night with a Justin Turner home run ball, a new Dodgers sweatshirt, got to be on TV, and gained a memory that will last a lifetime. Not too shabby.