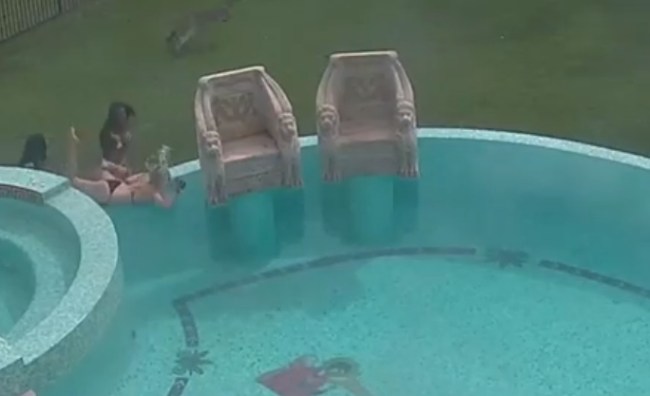 Remember playboy and millionaire tobacco tycoon Travers Beynon AKA “the Dan Bilzerian of Australia” AKA the Candy Man? Well, he’s still living (if you can call it that) his miserable existence of being filthy rich and surrounded by Instagram models all of the time (/s). Unfortunately for some of his Instagram model friends, they were terrorized by an overzealous kangaroo.

Several models were doing a photoshoot at the playboy’s mansion when a kangaroo decided to get show off its best side. The aspiring model/kangaroo jumped into the shot and scared all of the girls away. The comical scene was captured by a surveillance camera at the mansion in Gold Coast, Australia.

“It was a relaxing afternoon at the Candy Shop Mansion, where a group of girls where taking photos in the backyard when Spartacus, the resident guard dog spied a kangaroo and did his duty and gave chase,” the YouTube video is captioned. “The kangaroo fled up the side of the Mansion with Spartacus nipping at his feet. At this moment Skippy realized he was a lot bigger than Spartacus and wasn’t going to take this sh#t! So he promptly stopped, turned around, stood upright then chased Spartacus and the screaming girls around the backyard.”

The women frantically ran around the backyard of the mansion, some attempted to jump over the fence (not sure exactly why they didn’t try to open the door first) and one clever Instagram model jumped into the pool to escape the hopping menace.

“The kangaroo then stopped and decided it was time to change from flight to fight. The roo stopped, got up on its tail and began to chase after Sparti and Vanesa,” Beynon said.

RELATED: This Kangaroo Attacked This Man’s Dog, So He Punched The Marsupial Right In Its Dumb Face

One of the models scratched up her stomach while climbing over the gate and another injured her ankle in the kangaroo incident. No word on whether they are taking the kangaroo to court.

RELATED: Rhino Poacher Trampled To Death By Elephants And Then His Body Was Devoured By Lions