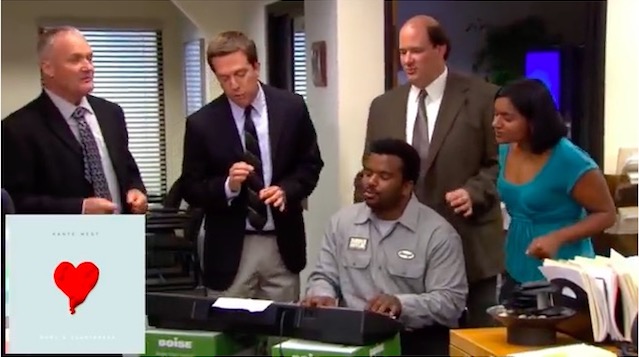 If I hadn’t seen every Office episode three times and you put a gun to my head and asked me if Michael Scott or Kanye West said the above quote, I’d pull the trigger for you. Because in the Venn Diagram of these two people, this quote is the portion that intersects.

And, as YouTube user MrBroks00 reveals, Michael Scott and his Dunder Mifflin underlings can tell us much more about one of the greatest artists of our generation than the man can himself. In a video that’s going viral, Kanye’s discography is perfectly encapsulated by a montage of scenes from The Office.

Take a couple minutes out of your day to drink in this artwork:

808s and Heartbreak album: “I was under the impression that this was going to be a rap.” Beyond accurate.

This isn’t the first time this concept has been brought into existence, but it very well could be the best. Check out this video comparing SpongeBob SquarePants to Radiohead that Radiohead’s Jonny Greenwood called it “perfect. Or Kanye’s albums described using Simpson’s scenes.

Ok, I think I was supposed to actually do some work today. Bye.