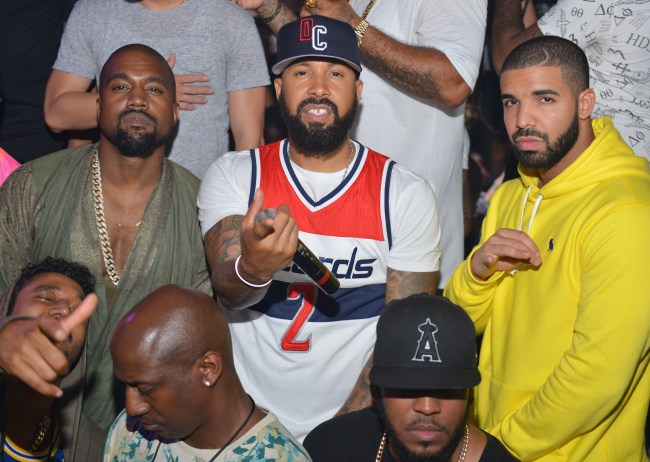 It’s been a weird summer for rap beefs. We’ve currently got that Eminem vs. Machine Gun Kelly battle going on. Why is MGK even in the same conversation as Eminem? That’s beyond me.

Last month, Nicki Minaj skewered any man she’s ever worked with in her old-school-style diss track Barbie Dreams where she took shots at 50 Cent, Quavo, Bow Wow, Fetty Wap, Drake, Lil Uzi Vert, Young Thug, Desiigner, DJ Khaled, Tekashi, and others. Honestly, there were too many to keep disses to keep track of on Barbie Dreams.

Going back a couple months we had the Drake-Pusha T beef that was all but certain to splinter the Hip-Hop industry into pieces if it kept going before Rap-A-Lot CEO J. Prince stepped in and told everyone to knock this shit off.

That beef between Drake and Pusha T involved Kanye West, and it was all timed around Drake releasing new music. Things got HEATED for a few days there with Pusha T even calling out Drake for having a secret child with a former stripper that Drake had been keeping hidden from the world. This later proved to be true when Drake rapped about his son on his most recent album.

Flash forward to this week and there was news that Drake disses Kanye on French Montana’s new track No Stylist, which triggered rumors that the beef between Drake and Kanye were actually caused by Drake hooking up with Kanye West’s wife Kim Kardashian.

Some dude even went into straight-up detective mode to try and prove that Drake did hook up with Kim Kardashian.

We caught up? Getting the vibe that all is not well between the one-time good friends?

Yesterday, Kanye West took to Twitter to apologize to Drake for all the drama of the past summer. In a series of tweets, Kanye praises Drake’s current show, apologizes, and pledges to come make see the show and make nice in the next few days.

Sending good energy and love to Drake and family and crew💜💜💜

I understand where the confusion started pic.twitter.com/oxSEEbNB1g

Let me start by apologizing for stepping on your release date in the first place … We were building a bond and working on music together including squashing the issues with Cudi at our office.

since we were building as friends and brothers I should have spoken to Pusha about the Quentin Miller bar. There should have been no songs with my involvement that had any negative energy towards you

I don’t believe this one for a second. You know damn well Kanye listened to these tracks more than once.

I did not have any conversations about your child with Pusha. I don’t play with the idea of people’s children after I spoke to Wiz a few years earlier.

Why even bring this up? You understand Pusha’s issues and that somehow justifies outing Drake’s kid that he was raising in private?

I understand Pusha’s issues as a man if someone mentions your fiancé men go mask off. I’ve done the same myself at times. I love you and I love Pusha and we all have an admiration for each other’s craft.

This is all Jedi level. I will be coming to your show within the next seven days to give love and be inspired by the art you have created.

READ NEXT: Someone Went Into Full Detective Mode To Support The Wild Theory That Kim Kardashian Cheated On Kanye With Drake

Did the cheating rumors prompt Kanye to hop back on Twitter and fire off these tweets? Or was it all genuine and Kanye misses his friend?

Is Kanye worried that Drake has some fire in his back pocket that he can pull out at any time on a diss track or is this something we shouldn’t read into too much. Maybe Kanye really just wants to make nice.