On Today’s Episode Of ‘No Kidding’, Kanye’s Loved Ones Reportedly ‘Concerned’ After South Carolina ‘Campaign Rally’ 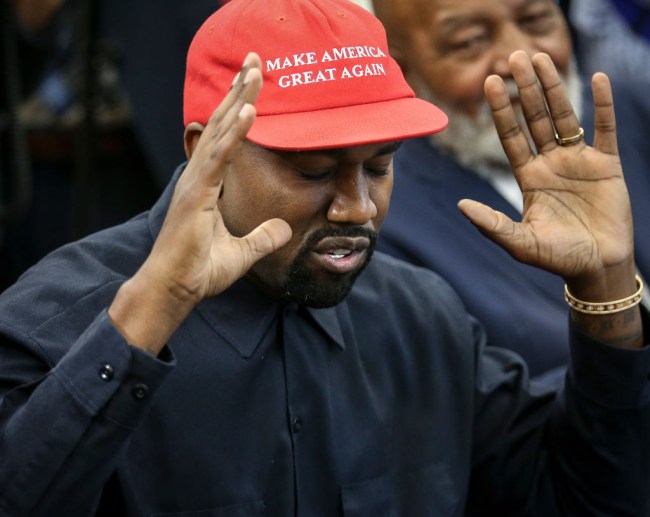 Anyone with two eyes and a functioning brain who watched those Kanye West “campaign rally” videos from South Carolina on Sunday could easily see — doctorate in psychology or not — that this is a man that’s clearly in mental distress. As as I, like I’m sure you may have, watched on in horror, my first and most prevalent thought was: “How on Earth did it get to this point and where are his friends and family?”

Hey @chancetherapper, instead of feeding into your manic buddy’s delusions of grandeur, maybe get him some real help? Idk just a thought. Just spit ballin’ here.

Kanye West’s history of mental illness is well-documented at this point. For better or for worse, he’s worked it into his art and his brand — lest we not forget, the cover of his Ye album read “I hate being bi-polar, it’s awesome.” He’s had to cancel entire tours due to breakdowns. He’s shared he often has suicidal ideation. Again, while I don’t have any sort of training in psychology (actually, that’s not true, I minored in Psych at Rutgers U), I’ve got to imagine that this is not the type of person who should be holding shotgun campaign rallies because he simply decided to run for President.

To no one’s surprise, said campaign rally did not go over well, as the 43-year-old rambled, and weeped, about Harriet Tubman not actually freeing slaves (the first clip), abortion, gun rights, his father, almost killing his daughter (the second clip), and giving a million dollars to anyone who has a baby.

Oh my God, what is happening pic.twitter.com/4wWgT6tw8O

Now, less than 24 hours after the truly upsetting event, reports indicate that Kanye West’s friends and family are “concerned” about the controversial artist.

Kanye West’s off-the-rails campaign stop Sunday in North Charleston, South Carolina may not only hurt Ye politically, he has concerned, upset and alarmed many of his friends and the Kardashians, sources connected to Kanye tell TMZ.

Our sources say those around him believe Kanye is in desperate need of professional help and is in the middle of a serious bipolar episode, but he won’t listen to them.

We’re told they also believe Kanye is tanking some of his businesses, if not all of them, with rants like when he went on about Harriet Tubman, claiming she did not free slaves. His family and friends know comments like these are the things that trigger boycotts.

Hopefully, with those around him now reportedly “concerned” enough to talk to TMZ, they’ll get this man the help he so clearly needs. We wish Kanye the best.