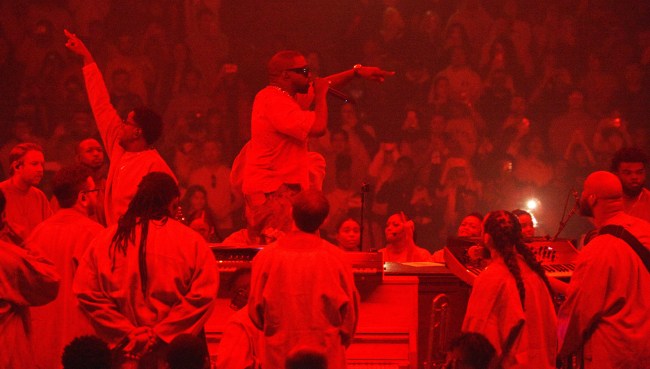 Remember Kanye West’s popular Sunday Service shows? At one point he wanted to start his own church.

Turns out that members of his Sunday Service choir along with hundreds of crew members have filed two separate class action lawsuits against West for allegedly mistreating them.

According to Page Six, attorney Frank Kim is representing more than 500 performers in one lawsuit, while attorneys at Harris & Ruble are handling the lawsuit filed by approximately 300 crew members.

The reason for the lawsuits, The Sun reports, is because performers and crew, including those that worked on West’s opera Nebuchadnezzar in November 2019, who also worked one rehearsal day, should have been classified as employees, not independent contractors. Which means they should have been paid for overtime and breaks, but were not. Several also claim that what they were paid was not paid on time, if at all.

Lawyers are now tracking down other alleged “victims” of Kanye’s Sunday Service shows, and has dozens of people lined up to join the lawsuit meaning the final tally will be closer to 1,000 people, the source said.

“They’ve got hundreds of people on board already, but they’re talking to many, many others, who want to be a part of it. People are very upset how they were treated, saying it’s their worst experience,” a legal source told The Sun.

“People in the lawsuit are asking their friends who’ve worked on previous Sunday Services, and they’re jumping at the chance, they want to get involved and talk about their horrible time.

“Now it’s about proving that Kanye is the employer and the buck stops with him. Now that there’s others coming forward, then the complaint will be amended and be bigger in scope.

“No one knows how involved Kanye himself was, if he knew what was going on, as it was all so last minute, it was terribly ran.

“Whether it was mismanagement, accidental, or on purpose, this is a very strong case.”

Back in 2019, Kanye held a $55 Brunchella Breakfast that was compared to the Fyre Festival. This sounds far, far worse.

The two lawsuits, which Los Angeles County Superior Court has joined together, could cost West as much as $30 million. Of course, he could settle for far less, but it will still be in the millions of dollars.