Katy Perry Ordered To Pay $2.3 Million To Christian Rapper After Jury Finds She Stole His Beat To Make ‘Dark Horse’ 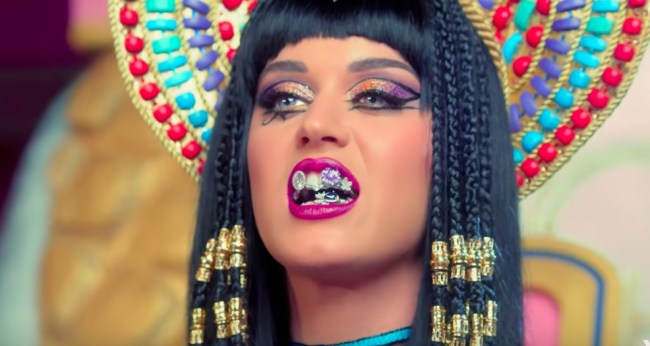 Last week, a federal jury in Los Angeles awarded the plaintiff, Marcus Gray, a Christian rapper who goes by the stage name Flame, $2.78 million in damages after finding that Perry’s team stole heavily from his 2008 gospel song Joyful Noise to create the 2013 hit, Dark Horse. The song reached number one on the Billboard chart for four weeks.

Here is a comparison video of the two:

“The writers of Dark Horse view the verdicts as a travesty of justice,” the statement reads. “There is no infringement. There was no access of substantial similarity. The only thing in common is unprotectable expression — evenly spaced “C and “B” notes — repeated. People including musicologists from all over are expressing their dismay over this.

“We will continue to fight at all appropriate levels to rectify the injustice,” the statement concludes, presumably meaning that, as expected, an appeal is in the offing.

The jury found that Perry should pay $550,000 in damages, with Capitol Records responsible for the majority of the balance. A couple mill is no joke, but it pales in comparison to the $41 million in profit the song raked in.

Perry testified during the seven-day trial that she had never heard Gray’s song before, but Gray’s attorney’s argued that it’s likely she did, pointing to its millions of views on YouTube and the Grammy nomination his Christian album received. Attorneys also cited Perry’s Christian roots to bolster their case. Perry countered that she wrote her song in Santa Barbara in four hours after hearing the beats laid out by collaborator, Dr Luke.

Perry likely won’t lose sleep over the decision seeing as the 34-year-old is worth an estimated $330 million and earns $20 million a season as a judge on American Idol alone.