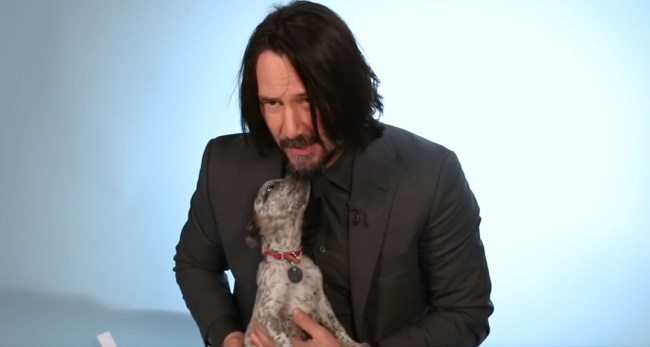 Keanu Reeves seems to be such a down-to-earth Hollywood movie star, which is quite the anomaly in this day and age. Keanu’s unpretentiousness is one of the main reasons that people adore the John Wick star. Keanu showed even more likeability in a new interview where he answered some interesting questions while he played with some adorable puppies. Thankfully none of the puppies were harmed in this video and John Wick didn’t snap and go on a homicidal killing spree.

Keanu is doing the press tour to promote John Wick: Chapter 3 – Parabellum, which doesn’t really need any publicity at this point because it already poised to dethrone Avengers: Endgame at the box office with an estimated $56.9 million in sales in its opening weekend. Plus, John Wick 3 has near perfect reviews.

In a video interview with BuzzFeed, Keanu answered some fan-submitted questions in a room full of puppies and this should be the standard format for all interviews going forward.

Keanu was asked what his “secret for always staying down to earth” was and he replied with, “Well, I mean, gravity.” Dad Joke Level: 5,000.

Reeves was asked: “What was the craziest experience you had while filming John Wick?” To which the action movie star replied, “Doing a gunfight on a horse on the streets of Brooklyn. That was pretty crazy.”

“I did a lot of training and it was really fun,” said of preparing for his assassin role in John Wick: Chapter 3 – Parabellum. “The Matrix, the first time, was learning Wire and Kung Fu. John Wick was Judo and Jiu Jistu, and a lot more gun manipulation, and that was lots and lots and lots [of fun]. I love doing action films, I love the training, I love being there as much as I can to create that relationship between the character and the audience.”

RELATED: Videos Of Keanu Reeves Being Trained Gun Tactics By A Navy SEAL For ‘John Wick 3’ Is So Interesting To Watch

Reeves said that the only similarity between him and his character John Wick is that they “might share a kind of dry sense of humor. Other than that, I can’t really say.”

Keanu said that his characters John Wick and Ted Logan would get along. “Yeah, why not? Yeah, that’d be an interesting conversation. Maybe we could talk about music.”

“If you had to live in any of the films you’ve been in, which one would you choose?” Keanu couldn’t pick one of his movies to live in. Doesn’t Keanu want to be Shane Falco all the time and QB for the Washington Sentinels like he did in The Replacements?

Keanu was asked: “If you could choose any superhero or villain to play in the Marvel or DC Comics universe, who would it be and why?” Reeves responded, “When I was a kid I always wanted to play Wolverine. So, Wolverine.” Hugh Jackman isn’t playing Wolverine anymore, this seems like a perfect casting replacement.

Reeves talked about his character in Toy Story 4 and said it is “Duke Kaboom, Canada’s greatest stunt man.”

When asked “What advice would you give your 17-year-old self,” Keanu said, “I hate giving advice.”

Come for the Keanu Reeves interview, stay for the adorable puppies.