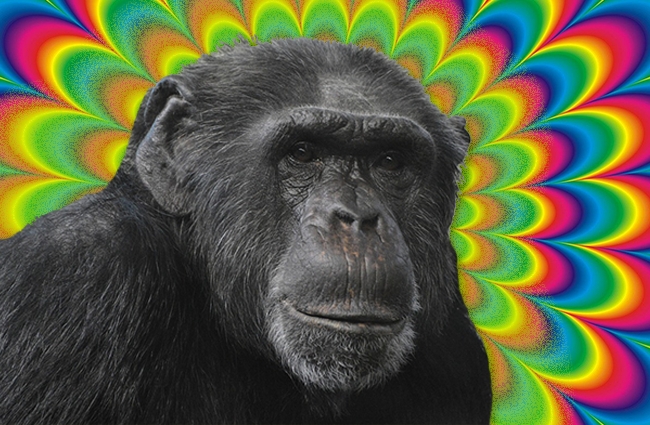 Earlier this year, I went down an internet rabbit hole after coming across a story concerning a rapidly expanding army of constantly-pooping hippos currently wreaking havoc on Colombia’s ecosystem. While the species is native to sub-Saharan Africa, the animals that now roam the country can trace their roots back to the ones who first made their way to Medellin courtesy of Pablo Escobar, who kept them in captivity at his private zoo before they eventually made their way into the wild.

Now, I would’ve assumed “Descendents of Non-Native Animals Still Roaming Around Decades After They Were First Introduced Thanks To High-Profile Figures in the Drug World” would be a fairly exclusive category but it turns out there may in fact be another example thanks to a California town that may or may not be home to the offspring of monkeys who made their way out of captivity courtesy of famed psychonaut Ken Kesey.

I recently came across an article from KQED penned by a Rae Alexandra, who found herself in the fairly secluded hamlet of La Honda, which counterculture figures including Hunter S. Thompson and Allen Ginsberg regularly escaped to thanks in no small part to the acid tests Kesey used to throw after setting up shop there in the 1960s. After hearing howling in the woods during a visit with a friend, she joked it sounded like a monkey only to be informed that might indeed be the case.

The entire essay is worth a read, as the writer found herself tumbling down a rabbit hole of her own after hearing a rumor that the head of the Merry Pranksters had found himself in possession of a simian that had been frequently dosed with LSD as part of the infamous government-funded MK Ultra program that was used to examine the effects of the drug. However, he had nothing on a Stanford professor dubbed “Monkey Bill” by La Honda’s residents, who some residents say kept upwards of 35 monkeys on his property that he regularly dosed with acid and other psychedelics.

At some point, Bill was told to euthanize the animals, but people familiar with the story claim he was tripping with the One Flew Over The Cuckoo’s Nest author one night and they decided to grant the animals their freedom by letting them wander into the sea of redwoods that surround the town (although it’s believed he kept one of them as a pet). From that point on, the animals and their progeny were regularly spotted digging through garbage and simply wandering around, and while the frequency of those visits eventually waned, people there are convinced there are still some descendants in the forest to this day.

In the end, Alexandra was unable to actually prove that’s the case, but like Special Agent Fox Mulder, I want to believe.