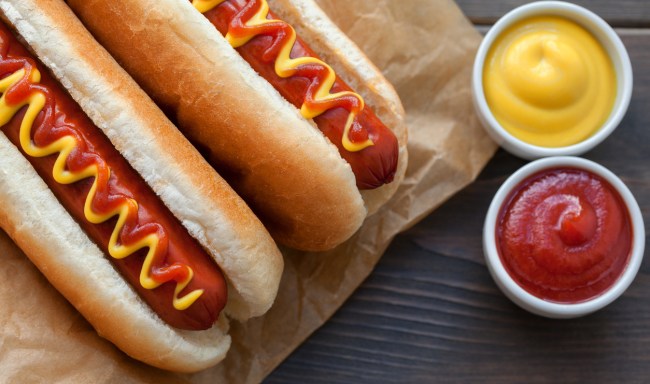 This year, I celebrated Independence Day by inviting some people over to my place to engage in the proud American tradition of grilling meat over an open flame after hitting up Costco and buying what was in retrospect a laughable amount of ground beef and an aggressive number of hot dogs.

Of course, no trip to Costco is complete without dropping $1.50 on a giant tube of meat with all of the fixings and I was going to town on the condiments (including the chopped onions dispensed by that magical machine) before someone rolled up next to me and remarked, “You know, you’re not supposed to put ketchup on a hot dog.”

I hit him with an “Ok, man” before moving on with my life but the debate reared its ugly head yet again at my cookout, where I was once again ketchup-shamed by someone who will not be receiving an invite to next’s year’s barbeque.

I woke up this morning to discover it’s National Hot Dog Day, and over the course of the past few hours, I came across a number of self-proclaimed hot dog purists who have made it very clear putting ketchup on a hot dog is a mortal sin.

Now, the time has come for me to take a stand.

I tried to get to the bottom of why this objectively dumbass debate exists in the first place, and after doing some digging, I discovered the National Hot Dog and Sausage Council—a thing that is apparently a thing—has taken a stand on the issue by proclaiming ketchup on a hot dog isn’t kosher even if the dog in question is (assuming you’re over the age of 18).

After researching a bit more, I came across an article that tried to explain the origins of the debate. that suggested it can be traced back to hot dog slingers at baseball games who asserted bugs were drawn to ketchup thanks to its sugar content and only offered mustard as a result.

Sure, but even if that’s right, those dudes are wrong—just like Dirty Harry was when he dropped this bullshit line.

One so-called expert who agrees with the NHDSC’s assertion that ketchup is a juvenile condiment claims it covers up the taste of the hot dog and another hot dog scholar from Chicago echoed that sentiment without realizing how patently absurd it is.

Why is that? Well, my friends, if you’re familiar with Chicago-style hot dogs, you’re aware they’re garnished with a laughable number of toppings aside from mustard—toppings that include hot peppers, celery salt, onions, and tomatoes as well as relish and pickles just for good measure.

Are you really going to sit there and tell me those don’t cover up the taste as well? I’ve had them, and while they certainly have their place, I can’t help but point out the hypocrisy.

You know what shouldn’t be put on a hot dog? Fucking mayonnaise. Whether you’re for or against putting ketchup on your hot dogs, I think we need to put our differences aside and agree the Devil’s condiment has no place on cylindrical mystery meat.

With that said, if you’re deranged enough to do that—and even if you aren’t—I’ll respect your right to put whatever the hell you want on a hot dog and only ask that you respect my right to put ketchup on mine in return.