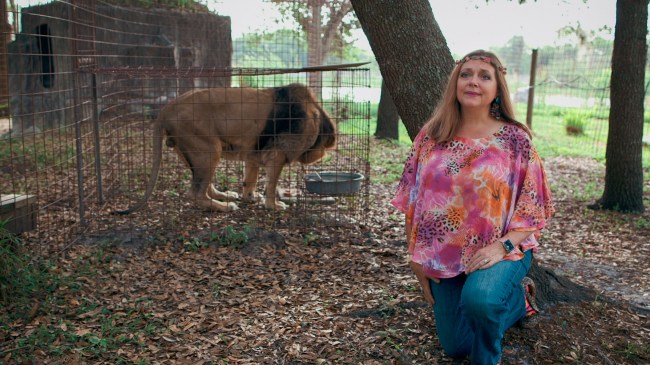 The band responsible for Joe Exotic’s music (songs like ‘I Saw A Tiger’) just released a music video for a new song titled ‘Killer Carole’ which focuses on Carole Baskin and her ex-husband who went missing and was never found. I could spend all day breaking down this music video and the ways in which each scene is progressively insane but I think this is something that needs to be seen by everyone who watched Tiger King.

Given the pace that mainstream news has moved at for most of 2020, it’s truly remarkable that we’re still talking about Tiger King almost halfway through the year. Just yesterday there was news from the Sheriff investigating the death of Carole Baskin‘s husband. That Sheriff claims her ex-husband’s will was forged which could lead to a new slew of revelations.

The Vince Johnson Band is the group responsible for Joe Exotic’s music, the songs like ‘I Saw A Tiger’ which went viral after they were featured in Tiger King. The late Daniel Clinton previously made up half of the Vince Johnson Band (with Vince) but he passed away last year due to a heart attack. In recent days, the Vince Johnson Band signed an exclusive deal with BMG Rights Management and Create Music Group and this is their first music video since going mainstream.

On YouTube, the tiny description below the video describes this as ‘A Country western music video about a woman who may or may not have killed her husband and then also may or may not have fed him to her tigers.’ But you alreadyd\ knew that, didn’t’\ you? You just have to see the finished product to appreciate how crazy it really is.

I’d say that 2020 simply could not get any weirder but we know that’s not the case. There’s no end in sight to how strange this year will get.

According to TMZ, all of the Vince Johnson Band songs that were previously attributed to Joe Exotic will soon be compiled into an album which means we can probably expect ‘I Saw A Tiger’ to be remixed into a club banger by the Fall.

Here’s that ‘I Saw A Tiger’ music video just in case you’ve forgotten how absurd it was:

While this new music video might be a slight annoyance to Carole Baskin, she’s now the proud owner of Joe Exotic’s Oklahoma Zoo after a judge previously awarded Carole $1 million in a trademark infringement violation which Joe Exotic never fully paid up. Jeff Lowe (the guy with the weird hats and graphic t-shirts) was the previous owner while Joe Exotic’s been in jail but the judge has now transferred ownership to Carole Baskin. You can read up on all of that right here.