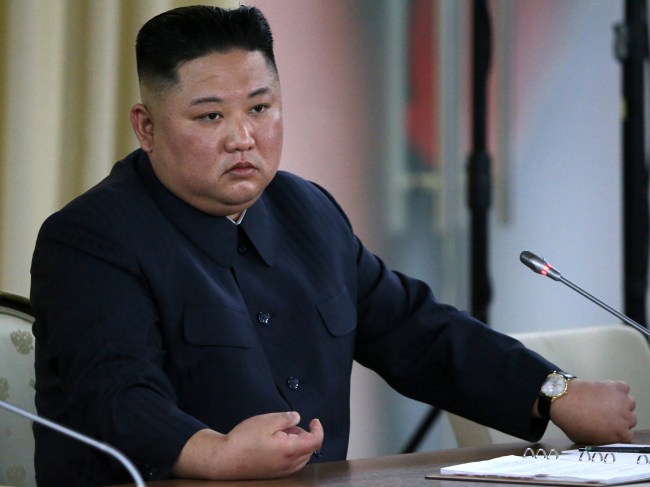 North Korea’s PR team may be close to re-creating a Weekend At Bernie’s situation starring its “Great Successor” aka “Dear Respected” aka “Supreme Leader.”

After skipping several public appearances over the past few months, a South Korean diplomat is speculating that the 36-year-old North Korean dictator has fallen into a coma and that his younger sister Kim Yo Jong, is slated to take power.

Chang Song-min, a former aide to South Korea’s late president Kim Dae-jung, claimed that Kim is in a coma “but his life has not ended,” according to the New York Post. The rumors come three months after claims that Kim Jong Un was clinging to life after a botched heart operation.

Roy Calley, a journalist who’s traveled extensively in the Hermit Kingdom has since reported that the leader, who once claimed to have the ability to bend space and time, has died.

If true, this would be shocking to everyone who isn’t familiar with Kim Jong Un’s habits. The only thing he treats worse than the people of his nation is his own body.

According to Newsweek, in 2012 Kim Jong Un reportedly became so fat that he developed a cyst on his ankle and required surgery to remove it. Two years later, he reportedly developed gout and needed to retreat from public eye for a period of time after gorging on too much Emmental cheese following a massive shipment from Switzerland. It should be noted that as of 2019, 10 million North Koreans were suffering from food shortages.

My only goal in life is to feel as happy as Kim Jong Un was when he went to the cheese factory pic.twitter.com/tR7DCUuoWM

In 2016, it was reported that the dictator showed up to a meeting with top military personnel blackout drunk, and ordered them to write apology and self-criticism letters for their inability to produce ballistic missiles. The next morning when his staff showed up to his villa, he had no recollection of the meeting, and the military men began sobbing with joy for being spared his wrath.

In 2019, the Dutch port of Rotterdam seized 90,000 bottles of Russian vodka, which officials believed were headed for Pyongyang.

“He drank a lot,” Fujimoto told the website. “His favorite was Cristal, usually about two bottles [in a sitting].”

Moral of the story: Kim Jong Un is (was?) here for a good time, not a long time.