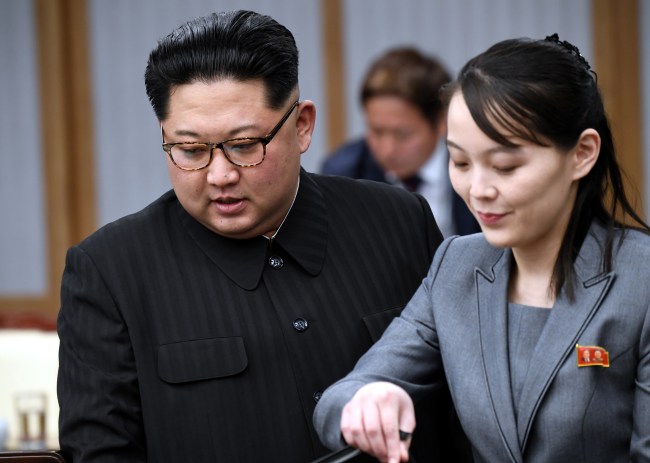 Which sets up a fascinating power dynamic. Who will fill his seat as Ruler of the Hermit Kingdom, Lord of the Andals and the Seven dinners, friend to Dennis Rodman and refuser of toilets?

Lurking isn’t easy. You have to be seen and not seen at the same time. If nobody sees you lurking, it’s just hiding. But if you lurk to prominently, you’re just part of the circle. It’s all about that fine line between hiding and participating. And if lurking is an art form, Kim Yo Jong is Picasso.

She’s been hanging around, picking up the rhythms of ruling for years. But many experts seem to think that the patriarchal hierarchy of North Korea would never allow for a female ruler. That seems like exactly the sort of thinking that might inspire a female leader to make her doubters disappear?

Time– Oba, the former State Department official, says that if Kim Yo Jong were to take the reins, she would likely focus on consolidating her power, warding off threats and demonstrating strength—much as Kim Jong Un did when he assumed control in 2011.

Ok, that sounds pretty intense. “Warding off threats” in North Korea typically means covering your political adversaries in gruyere and dropping them into an above-ground pool filled with starving rats. Or maybe that’s how I’d do it. Either way, something tells me she’s going to come up with some WICKED ways of killing people.

In her official capacity, Kim Yo Jong is the Vice Director of the Workers’ Party of Korea Propaganda and Agitation Department, the agency primarily responsible for censorship in the country. In April, she was reappointed as an alternative member to the powerful decision-making body, the Politboro of the Central Committee.

She’s been working at the agency that has been responsible for the lockdown of information on a nationwide level. What’s more, she’s married to a big swingin’ dick named Choe Song. Do NOT underestimate Kim Yo Jong.

Of course there are a few other candidates for the job. So let’s break down the players in North Korea’s real-life Game of Thrones:

Kim’s uncle Kim Pyong-il. Strong Paektu bloodline- he’s the son of Kim Il-sung- and worked abroad as a diplomat for 40 years as he was seen as too much of a threat to Jong-il. Now retired back in Pyongyang, could be seen as a way of keeping the family in power. pic.twitter.com/wnjuP4VGb3

Kim Jong Chul, Kim Jung Un’s older brother, who is best known for his love of the British guitarist Eric Clapton, is another a possible successor (Time).

Jong-chul was the original choice over Jong-un, given that he was the older brother. But he loves Eric Clapton so much that he can’t be expected to rule a country, especially since Clapton just rescheduled his 2020 European tour for 2021. Too many live shows, too little time. Tears in heaven indeed.

South Korean media calls him 'the side branch of the Paektu bloodline 백두혈통의 곁가지.'

Despite spending 40 years overseas as a foreign diplomat, he reportedly remains popular in the country owing to a resemblance to [North Korean founder] Kim Il Sung.

Kim Pyong-Il doesn’t seem particularly interested in the gig, as he’s spent the majority of his life abroad. But he’s got a fighting chance because he bears a passing resemblance to Kim Il Sung, founder and ruler of North Korea for 46 years. Because in North Korea, when you look like the guy, you might as well be the guy.

Can you imagine Kim Yo Jong losing to her uncle because of his appearance? Might be the most sexist thing I’ve ever heard!

Unfortunately, we probably won’t hear much about the succession process given how they tend to keep their cards close to their chest/starve their citizens to subdue them with fear. But to think that NORTH KOREA might be ruled by a woman before America elects its first female president is a sobering realization.

If you’re interested, documentary filmmaker and the founder of Vice Shane Smith has made a couple trips to North Korea, and his pieces are fascinating. Start here: