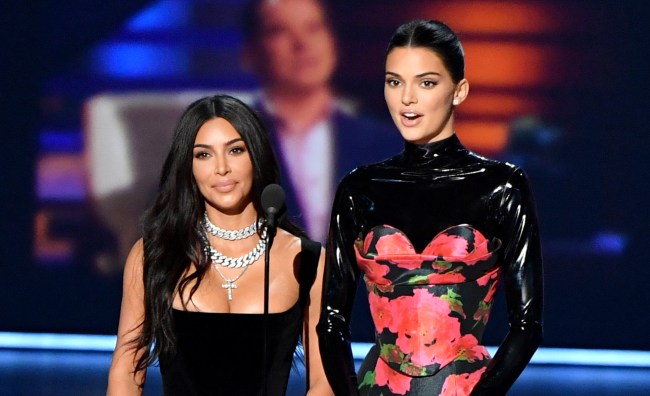 In a shocking turn of events, because in all the years they have been on TV they’ve never been accused of being out-of-touch or tone-deaf, Kim Kardashian and Kendall Jenner got laughed at by the Emmys audience and people on social media for something they said during their presentation of the Best Reality Competition Program award.

During their little speech on stage at the Microsoft Theater in Los Angeles on Sunday night, Kardashian introduced the category they were presenting by saying, “Our family knows first-hand how truly compelling television comes from real people, just being themselves.”

She was being serious. That was not intended to be a joke. A bunch of people in the Emmys audience laughed anyway, interrupting Jenner’s next line, “Telling their stories unfiltered and unscripted.”

Again, not a joke, but it should have been because as many on social media pointed out, both of those lines were pretty damn laughable.

Naturally, because they are who they are, social media had a field day making fun of Kim and Kendall.

Let us never forget that the entire Emmys crowd laughed at Kim Kardashian and Kendall Jenner when they described their show as “real,” “unscripted,” and “them being themselves.”

Did the #Emmys audience just laugh at Kim Kardashian? I don't think she was telling a joke. pic.twitter.com/JvUdZLPSAh

Wait did the audience just laugh at the Kardashians?! #Emmys pic.twitter.com/AF8GPBbZ9M

DID THE AUDIENCE JUST LAUGH AT KIM KARDASHIAN SAYING “Real people telling real stories about themselves” at the #Emmys?!?

I truly thought I heard them laugh at her for that line. Y’all so shady 😂

Did everyone just laugh after The Kardashians after said something how they “are just being themselves?” Haha

The entire room cackling at Kim Kardashian and Kendall Jenner when they presented Outstanding Competition Program is a whole mood. They really set them up with their lines about being "unscripted" and stuff, didn't they? #Emmys

Eeeek. There was a very loud laugh from the audience when Kim Kardashian was presenting. Laughing at her; not with her. It was uncomfortable (and, in my opinion, uncalled for) in the room. #Emmys