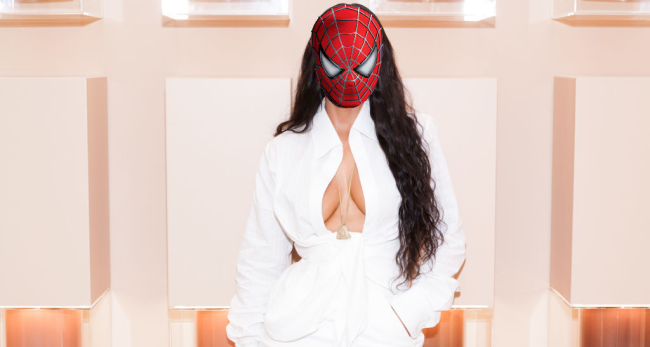 This is the second article I’ve written about Kim Kardashian today, but the two couldn’t be any more different. The first was the hilarious memes that hit social media in the wake of the news that Kanye West bought a house across the street from his ex-wife Kim Kardashian. This article, though, is far less hilarious, as it has to do with 41-year-old Instagram model spoiling the events of Spider-Man: No Way Home. We’ve got ourselves a good old-fashioned LeSean McCoy “RIP my dog TONEY STARK” situation on our hands.

Editor’s Note: This article will contain spoilers for Spider-Man: No Way Home

“[She] posted photos on her Instagram Story while watching the blockbuster new Marvel movie Spider-Man: No Way Home.

Kardashian showcased a few pivotal moments from the highly anticipated sequel’s climactic third act, prompting fans to express outrage for giving away spoilers to her 273 million Instagram followers. She has since deleted the posts.” [via People]

Granted, Kardashian posted about the film on December 27, which is a full ten days after the release of the film. If these were during normal times, I’d say that’s fair game in terms of giving people ample opportunity to see the film, but given the current state of the world, the rules have changed, particularly when you have such a massive audience at your fingertips (Kardashian’s 273 million followers makes her account the eighth most-followed in the world).

Naturally, given her carelessness in regards to the sanctity of spoilers, movie fans immediately took to Twitter to shred the eldest Kardashian.

not kim kardashian spoiling spider man on her story😭
wtf so SICK pic.twitter.com/r0TLW8GSKe

Kim Kardashian has 273,000,000 IG followers & just spoiled tf out of Spider Man in her stories lmaooo

I don’t even fucking follow Kim kardashian and the one moment I decide to watch her stories on instagram she post literally THEE whole spoiler of spider man. I’ve never hated someone so much

If you haven’t seen Spider-Man: No Way Home, I’d suggest doing so before Kylie Jenner gets her hands on the film.