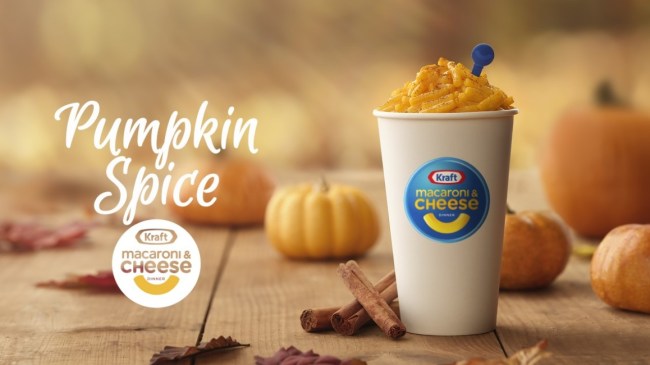 The one thing 2020 couldn’t destroy, stop, or slow down was pumpkin spice season. The yearly taste explosion is officially here and the Kraft company wants to capitalize on America’s obsession with all things pumpkin, cinnamon, and nutmeg.

After a successful test run in Canada, Kraft announced Thursday the new Pumpkin Spice Macaroni & Cheese will be available to people in the United States.

So how does a person score the weirdest pumpkin spiced product of 2020?

Our @KraftDinner friends in Canada had the idea to make pumpkin spice Kraft Mac and Cheese – and now we want to bring it to the US! Who’d give it a try?! 🎃🧀

Kraft’s Pumpkin Spice Macaroni & Cheese launched earlier this week in Canada and more than 30,000 people signed up to get a box.

Martina Davis, Brand Manager for Kraft Macaroni and Cheese, said in the press release, “After seeing the huge response Pumpkin Spice Mac & Cheese received north of the border, and even hearing some heated debates about it down here, we had to bring it to the U.S. for Americans to try. Who knows? Maybe it could become a new North American fall favorite.”

According to Kraft, the new Pumpkin Spice Macaroni & Cheese is “best served curled up with a cozy scarf, flannel shirt, and pumpkin-scented candle.”

I’m also suggesting a cozy fire to toss the mac & cheese into when you realize it’s a dumpster fire of flavors.