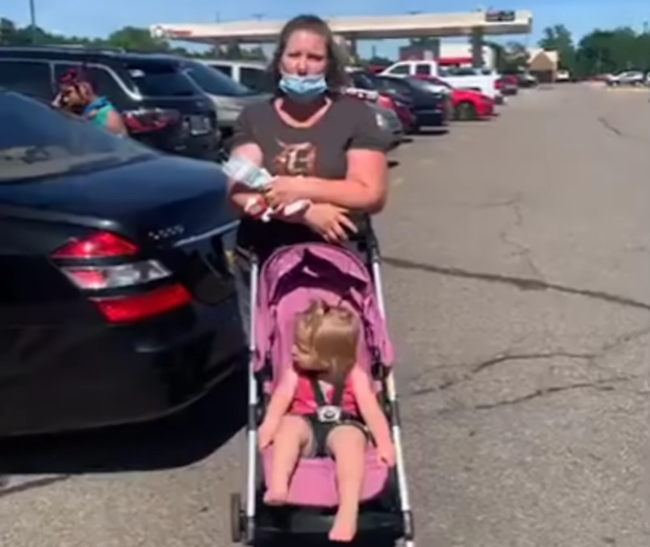 Another day, another Karen.

There was “Central Park Karen”, bagel shop Karen coughing on people, and the cosmetics Karen who looked like a moron when confronting a homeowner painting “Black Lives Matter” on his home.

There was even a Karen sighting in “The Last Dance” documentary.

Today’s Karen, dubbed “Kroger Karen”, is perhaps the most troubling. She decided to involve her child in her sad attempt to make whatever point she was trying to make while blocking another mom from leaving a Kroger parking lot.

Shaneeka Montgomery-Strickland was grocery shopping with her three children at a Kroger in Livonia, Michigan, when a white woman with a young child stood behind her vehicle and refused to let her pull out.

So what pissed off Kroger Karen to the point that she decided to use herself and her child as human speed bumps?

Montgomery-Strickland told Fox 2 Detroit the confrontation began inside the store when her son stepped on a shelf to reach a bottle of Gatorade. Kroger Karen got upset by the boy’s behavior and began yelling at him.

The mother of three said the situation escalated in the parking lot when the woman, while pushing a child in a stroller, approached Montgomery-Strickland a second time and called her a bitch.

Trump is going to get someone curb stomped. He has embolden these fools and soon or later they are going to run across the wrong person and get punished. #KrogerKaren pic.twitter.com/vQJhsGypqo

The police were called to the Kroger.

“When the police arrived on the scene, the woman quickly approached them and could be seen gesturing toward Montgomery-Strickland and her children, expressing her displeasure with being recorded.

In the remainder of the video, Montgomery-Strickland and a Kroger employee appeared to give statements to the police, and one officer could be heard saying “there’s no law that’s been broken, though” — though it’s unclear what the officer was referring to.

As a parent, I’ll say this about Kroger Karen – unless the kid is doing something to your kid, mind your business about how people parent their children. Especially a mom of three grocery shopping.

Taking three kids anywhere is like trying to swim while holding a bowling ball. It’s one of the worst chores of parenting. It doesn’t need any nosey Karens making the job even tougher.

Also, don’t use your kid as a human roadblock. Moron.

Montgomery-Strickland told Fox Detroit that “she did not have the woman’s name but that personal information was included in the police report.” She also stated that the store’s security guard stood outside and did nothing while the incident took place.