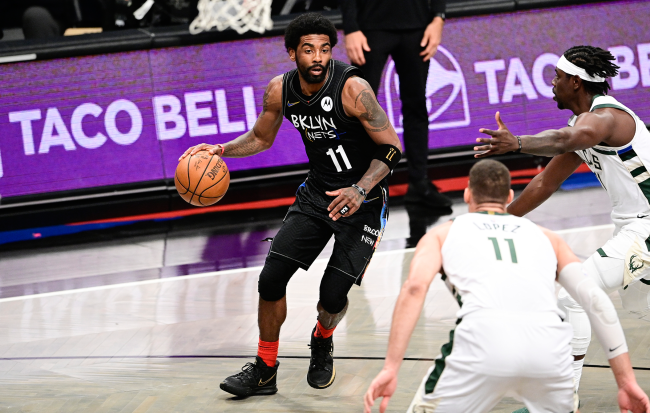 Last week, oft-disgruntled Brooklyn Nets point guard Kyrie Irving called the rumored new Nike Kyrie 8 “trash.” On Tuesday, he addressed his negative remarks and walked them back quite a bit.

After an Instagram account that tracks Kyrie sneaker releases leaked the purported design of the upcoming Kyrie 8 shoes posted a photo of what it claimed is the design for the upcoming Nike Kyrie 8.

Writing in the comments of the Instagram post, Irving said, “I have nothing to do with the design or marketing of the upcoming #Kyrie8, IMO these are trash!

“I have Absolutely nothing to do with them!

“Nike plans to release it without my okay regardless of what I say, so I apologize in advance to all my sneaker heads and true supporters of the #KAI11 brand.”

Fast forward to Tuesday, and Kyrie Irving says about the upcoming Kyrie 8 sneaker (via NBA Insider Shams Charania), “When you’re building something great, there sometimes comes a point when you need to recalibrate and refocus to ensure everyone involved is aligned. This is where the KAI11 brand and Nike are. It was unfair to put the blame on Nike or any one person. With that being said, we are diligently working, restructuring, and reimagining things together to make sure we get it right.”

He does know that it’s just a sneaker, right? And that, according to Forbes, he makes $11 million dollars from his deal with Nike?

Nike, thus far, has made no comment or issued a response to Irving’s rants about the Kyrie 8.

Always a problem with this guy