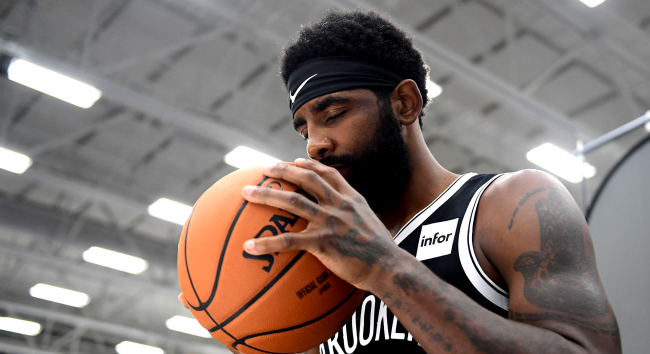 As Kyrie Irving spoke about facing his former team in Boston this week he voiced concern that his return to the TD Garden would result in him being the victim of racism by Celtics’ fans. This didn’t sit well with many former Celtics, including Danny Ainge.

“Hopefully we can just keep it strictly basketball,” Irving told the media. “There’s no belligerence or any racism going on, subtle racism or people yelling s–t from the crowd … I’m not the only one who can attest to this, the whole world knows it.”

Numerous former Celtics players including Kendrick Perkins, Kevin Garnett, Paul Pierce, and Rajon Rondo have all said that playing Boston was a tremendous experience for them and that the fans were nothing but supportive, even when they returned as opponents.

In fact, Perkins responded directly to Irving’s accusation this week, saying, “I lived there for eight and a half years and, me personally, I never dealt with any type of racism while I was living in Boston…I also came back as an opponent of the Celtics with the Oklahoma City Thunder and Cleveland Cavaliers and still never experienced any racism, and I was always the guy who was all around the town. It’s always extra with [Kyrie]. I don’t know why we’re surprised.”

Someone else with even longer ties to the Boston Celtics organization, general manager and former player Danny Ainge, who has spent 26 years with the team, agrees with Perkins.

Speaking to Toucher and Rich on Thursday about Irving’s remarks, Ainge said, ““Quite honestly, I have never heard any of it. I’m not saying the city of Boston, I’m saying the TD Garden. I think our fans are very respectful.

“I think that we take those kind of things seriously. I never heard any of that, from any player that I’ve ever played with in my 26 years in Boston. I never heard that before from Kyrie and I talked to him quite a bit. I don’t know. As far as I’m concerned, we’re just playing basketball. Players can say what they want.”

Ainge was also concerned that Irving’s accusations of racism by Celtics fans will hurt the team down the road when it comes to signing free agents.

“I think that everybody’s influencing somebody,” Ainge told Toucher and Rich. “So yeah, I think that there’s – my fear is that could possibly happen. But I think that our players, and players that have played here in the past, all have their experiences to share, and that’s just one player.”

Maybe, just maybe, Irving has received such a poor reception at the TD Garden because, well, he’s not the easiest guy to like, especially for fans in Boston.

“I’m not sure what I say is going to make a difference,” added Ainge. “Fans will do what they want to do. I’ve been booed a million times in my career and I enjoy it. I got a kick out of Trae Young last night. He was getting booed in New York and he was thriving in it, excelling in it and embracing it. I think it’s fun and a part of the game.”

The Nets currently lead the series with the Celtics 2-0 as they head into Boston for Game 3 of their first round playoff series Thursday night.