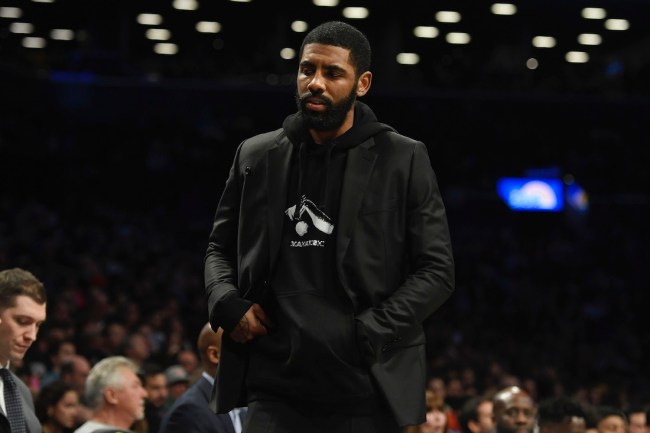 As all of us know, Kyrie Irving is a sensitive, deep, and emotional dude. While the Brooklyn Nets superstar isn’t the type of guy who often shows that personality on the floor — and is usually pretty calm, cool and collected — off the hardwood, the seven-time All-Star is a bit… misunderstood.

Remember, this is the same guy who dismissed the NBA season restarting last year, stepping up in the wake of protests and the pandemic to raise concerns about playing a sport for fear that it’d distract fans from the more important things going on in the world. Many slammed Irving for the stance. Unfortunately, he seemed to be right, as social inequality and ignorance continued to rear its ugly head as the season was played.

Given his depth and commitment to a number of different issues, it’s easy to understand why Kyrie Irving sometimes needs a mental health day from playing basketball — which the Brooklyn Nets have routinely granted him. The point guard was able to take a few games off earlier this NBA season for personal reasons, and, more recently, missed three games for the same excuse. Some might commend the superstar athlete for paying attention to his mental health, but Brandon Tierney, a co-host of the Tiki and Tierney radio show, isn’t one of them.

Speaking to his co-host Tiki Barber on Monday about Kyrie Irving’s personal days off, Tierney slammed the Nets’ guard, saying it’s preposterous that the guard can take so many personal days off and still earn his full $33 million salary this season — which gives fans a reason to complain about athlete contracts being so high. Take a look below at the impassioned rant.

"Every couple of weeks the guy says 'I'm not playing. I'm not feeling right. My minds not right.' You know what, that's not acceptable for fans."@BrandonTierney @TikiBarber discuss #kyrieirving taking multiple "personal" days off this seasonhttps://t.co/RYAEntBpcW pic.twitter.com/R9omNjFGSl

Fans have long complained about NBA contracts. Faulty, irrational argument. You make what someone is willing to pay for your services.

But personal days off every month without reason? Awful look.

Now THAT is something fans should never, ever tolerate. pic.twitter.com/8uv7M0TsLG

Point blank: This is an awful take from Brandon Tierney, and there’s no argument to even think he’s right. When did pro athletes need a written doctor’s note for missing games? When did it become unacceptable to take some time off to get your head right? If Kyrie Irving isn’t all there mentally, then he won’t perform at a high level because of distraction — which only makes fans more upset.

Here’s the thing, Tierney actually understands all this, and says he’s aware that positive mental health and personal issues are bigger than playing basketball. Unfortunately, he backtracks by saying Irving needs to play at some point. Why? If Irving isn’t ready mentally, it should be treated like any other physical injury.

Think about Karl Anthony-Towns, who tragically lost his mom to COVID last year. Had he not recovered mentally from that loss, would Brandon Tierney be slamming him for not playing this NBA season? After all, the T-Wolves’ center is earning $29 million this year, so it’s the same type of argument as Irving — that he’s sitting and earning a full salary. But Anthony-Towns’ mental health would be tangible and explainable, while Kyrie Irving’s isn’t because it’s not something Tierney really understands (nor seems to care about).

Who knows why Kyrie Irving’s taking these personal days to get his mind right? Honestly, who cares. It really isn’t anybody’s business as to why the point guard needs time to regain his focus. What does matter is that his employer, the Brooklyn Nets, is granting him the days he needs and supporting him. Brandon Tierney seems to understand the reason for personal days, he just doesn’t seem to understand why anybody would ever use them — especially when that somebody is a pro athlete making $33 million per year.