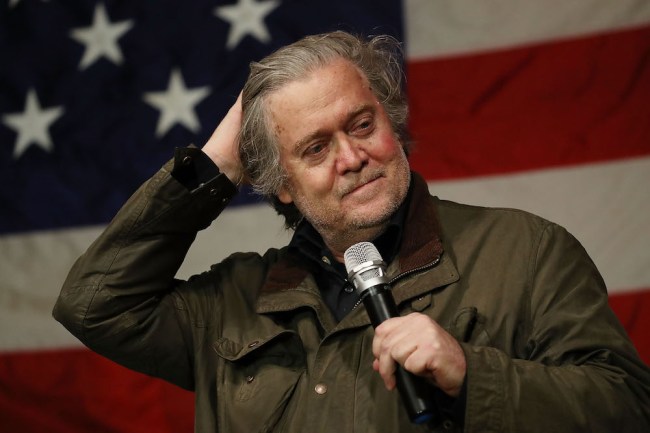 Former Trump advisor Steve Bannon was arrested yesterday on fraud charges. Bannon was picked up by US Postal Service inspectors aboard a 150-foot yacht suited for a Bond villain in the Long Island Sound near Westbrook, Connecticut.

The mega vessel – named the Lady May – is owned by a Chinese billionaire fugitive.

According to the Washington Post, Guo Wengui, one of China’s most wanted fugitives is wanted in Beijing on fraud, blackmail, and bribery charges.

Just to make clear the level of grift & fraud that Steve Bannon was running, I just wanna make clear that this wasn't some "Trump Boat Parade" boat he was arrested on, it was a $28 Million mega-yacht named Lady May https://t.co/XBZXhJd5vj pic.twitter.com/GE6nFeo5TH

The stunning lines of the yacht both appear sleek and hint at her highly efficient hull design. Her silver hull and superstructure make her instantly recognizable in every port and anchorage.

The interior is an elegant blend of white marble, bleached oak, stainless, and Macassar ebony that creates a modern yet warm and welcoming environment. The large windows allowing plenty of natural light in the saloon and the cleverly designed rotating seating area allows guests to maximise the stunning views.

The exterior guest areas on LADY MAY are finished are perfect for both entertaining and relaxing. The aft deck is spacious with a magnificent bar extending from within the main salon. The sundeck is impressive and beautifully detailed and can be converted to be semi-enclosed and air-conditioned for comfortable use in all climates.

Here’s a YouTube video showing the boat in action, possibly with James Bond tied to a chair somewhere on board.

The Lady May remained in Westbrook following Bannon’s arrest on charges he pocketed donations from the $25 million “We Build the Wall” fundraiser for the US-Mexico border wall.

Prosecutors allege Bannon personally pocketed $1 million in contributions meant for construction of the project which was funneled through a nonprofit under his control.

Bannon, 66, walked free after paying the $5 million bond following his initial court hearing where he was arraigned via video conference.