Lamar Jackson Has A Message For Ravens Fans Who Want Odell Beckham Jr. To Join The Team 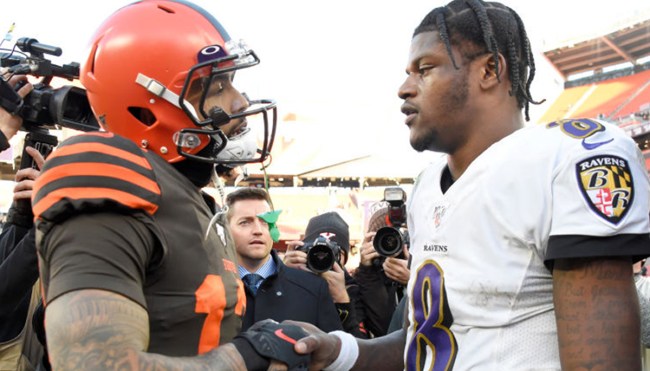 NFL wide receivers have a long and storied history of being absolute divas whenever things don’t go their way, and Odell Beckham Jr. is certainly no exception.

After repeatedly voicing his displeasure with how he was treated as a member of the Giants, the team shipped him off to Cleveland to make him their problem. After two fairly underwhelming seasons with the Browns that were hampered by injury, we were treated to a new batch of drama during the most recent campaign after his dad posted an 11-minute video highlighting multiple plays where Beckham Jr. wasn’t targeted despite being open.

It didn’t take long for things to spiral out of control from there, as Browns head coach Kevin Stefanski told the wide receiver to not bother to show up to practice on Wednesday before he was unceremoniously released by Cleveland on Friday morning.

As things currently stand, it’s unclear where Beckham Jr. will end up, but there are reports the Browns are in talks to restructure his contract to avoid having to shoulder the bulk of his currently salary if he’s picked up on waivers.

Browns and Odell Beckham have discussed a new contract structure that would reduce his base salary as low as around $1M, per source. All of this isn't done, both sides must agree, but possible Browns eat much of remaining $7.25M and a team inherits vet minimum salary off waivers

Despite the baggage he may bring to the locker room, there are plenty of fans who would be more than happy to see their team add him to the roster—including supporters of the Baltimore Ravens.

It would appear many of them have flooded Lamar Jackson’s Twitter mentions in the hopes he’ll be able to convince the Ravens to pick up Beckham, and the quarterback was forced to remind people there’s only so much he can do as a player as opposed to a member of the front office shortly after the news broke.

I know Jackson has a habit of giving his offensive line some pretty pricey Christmas gifts, but he might want to make sure he sets something aside for Baltimore’s social media manager after doing what he could to make this particular issue their problem instead of his.