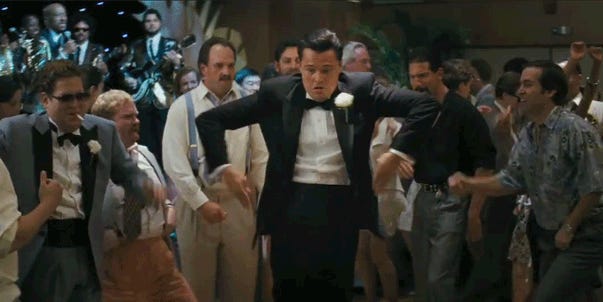 Leonardo DiCaprio attended Diddy’s star-studded 50th birthday party extravaganza over the weekend. Surrounded by some of the coolest celebrities on the planet, the accomplished Hollywood actor busted out some moves on the dancefloor and they are really something.

At the celebrity-laden birthday bash that had the likes of Kanye, Fergie, Cardi B, Post Malone, Pharrell, Kate Beckinsale, Snoop Dogg, Beyonce, and Jay-Z, Leonardo was dancing like nobody was watching.

The 45-year-old actor flaunted his best dance moves to Bobby Brown’s 1989 new jack swing anthem Every Little Step I Take at Diddy’s 50th birthday party on Saturday night. DiCaprio was dancing in front of his 22-year-old model/actress girlfriend Camila Morrone. For what its worth, Every Little Step I Take was released nearly a decade before Camila was born, which might be the reason why Morrone was not into while Leo looks like a middle-aged dad cutting the rug during his daughter’s sweet 16 party after turning off Lizzo to play Steely Dan’s Peg.

The enthusiasm for the late 80s R&B track is there, whether the dance moves are on point are for you guys to discuss amongst yourselves. But we can discuss “what are Leonardo DiCaprio’s greatest dancing moments of all-time?”

You’ve got DiCaprio as Jay Gatsby slow-dancing in The Great Gatsby.

In 2014 at Coachella, DiCaprio swayed left and right, which for all intents and purposes is considered “dancing.”

There is Leo doing a shimmy in Once Upon a Time… in Hollywood as Rick Dalton.

Leo was spotted dancing with a young woman in the Maldives to Timbaland’s The Way I Are featuring Keri Hilson from 2007.

There is the dancing scene between Jack and Rose (Kate Winslet) in Titanic.

But we all know the greatest Leonardo DiCaprio dance of all-time is obviously the amazing pop-and-lock display as Jordan Belfort in The Wolf of Wall Street wedding scene.

The Wolf of Wall Street (2013) Leonardo DiCaprio's dance scene was done on the spot, but he learned how to do it by himself over decades. On Ellen, he said "I used to be a pop-locker when I was in Elementary school." pic.twitter.com/AYAjoCG4BQ

The pop-and-lock dance moves were easy for Leo, that’s because a young DiCaprio nearly ditched his acting career to become a breakdancer. DiCaprio has been acting since he was 5-years-old, and has enjoyed a legendary thespian career that included winning 76 awards and 194 nominations. But he nearly quit acting when he was 11-years-old so he could stand in his b-boy stance all day long.

Leonardo once told Oprah, “Now, don’t ask me to breakdance because I’ve since lost my moves, but I was a breakdancer and I had a choppy, sort of punky haircut.” DiCaprio, who’s dance name was “Noodle,” even pop-locked his way to a second-place finish in a small German breakdance competition. Let your happy feet dance your worries away, Noodle