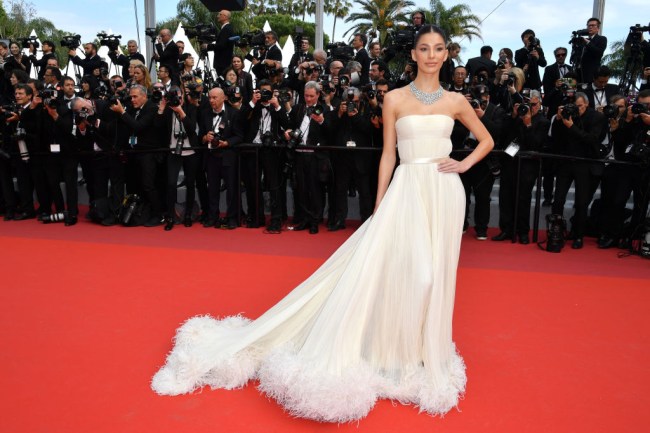 Nothing is certain in life but death, taxes and Leonardo DiCaprio dating a 20-something model. But according to a source close to the Hollywood actor, Leo is getting “pretty serious” about the relationship with his girlfriend Camila Morrone. If you believe that, I’ve got a bridge to sell you.

According to a new report by People magazine, they ask: “Are future wedding bells ringing for Leonardo DiCaprio?” Narrator: “No, no there are not.”

A source close to DiCaprio allegedly told the gossip site that Leo and Camila “seem pretty serious.” The “insider” added that “It’s definitely not a casual relationship. Camila spends a lot of time at his house.”

“Camila is long known as Leo’s girlfriend,” the source said. “And Leo introduced her to both of his parents long ago.”

RELATED: Leonardo DiCaprio Got Smashed In The Face With A Volleyball And It Instantly Became A Meme

Camila, a model from Buenos Aires, Argentina, were first linked together in January of 2018 when they were spotted in Aspen, Colorado. US magazine reported that DiCaprio and Morrone have been “family friends” who have known each other for more than 10 years. Camila’s actress mother, Lucila Sola, is dating DiCaprio’s friend Al Pacino.

The rumor mill also said that the “couple also travels frequently together, attending Coachella and, later, the Cannes Film Festival where DiCaprio debuted his upcoming Quentin Tarantino film Once Upon a Time in Hollywood.” The celebrity-based website added that “the two were photographed walking hand-in-hand while in New York City in May.”

RELATED: Gisele Numbed Herself While Dating Leonardo DiCaprio, Reveals Why They Broke Up, Says Tom Brady ‘Loves Clothes More Than I Do’

Leo likes to date beautiful models under the age of 25, this is a fact. A chart went viral in April that pointed out how “Leonardo DiCaprio Refuses to Date a Woman Over 25.” The 44-year-old Hollywood actor seems to believe that models have a dating window that extends until the age of 25. For whatever reason, DiCaprio has a history of dumping his model girlfriends by the time they turn 25-years-old.

Camila Morrone turned 22-years-old on June 16, 1997, which means that she has less than three years to convince Leo to marry her, otherwise she’ll face the chopping block like every other model.

People magazine interviewed DiCaprio on Monday at the premiere of Once Upon a Time in Hollywood and asked Leo if he would ever retire from the limelight. “I mean, I suppose at some point I might retire, but I’ve always looked at this as the greatest gift that anyone’s ever given me,” DiCaprio replied. “I feel like I won the lotto, so I’m going to keep going as long as they’ll have me.”

RELATED: Margot Robbie Got Her Big Break In Hollywood By Slapping Leonardo DiCaprio In The Face