Gisele Numbed Herself While Dating Leonardo DiCaprio, Reveals Why They Broke Up, Says Tom Brady ‘Loves Clothes More Than I Do’ 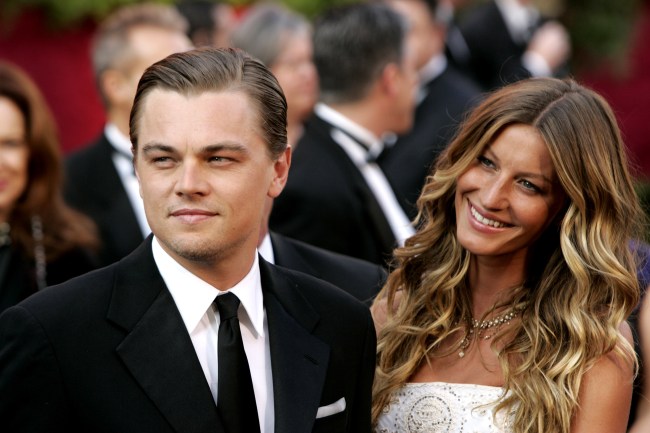 Gisele Bundchen is opening up about one of the true loves of her life. We’re not talking about her husband Tom Brady. Gisele is reminiscing about her long-lasting relationship with Leonardo DiCaprio. The week that Gisele’s husband needs to focus on winning a sixth Super Bowl seems like an odd time to rehash about her love life with the super popular guy she dated before Tom. But Gisele has a new book and is using Tom’s Super Bowl spotlight to help sell a few copies.

Gisele started dated DiCaprio in 2000, but the supermodel and Hollywood actor called it quits in 2005. She started dating surfer Kelly Slater in 2006, broke up, then began dating Brady in December of 2006 after they were set up on a blind date by a mutual friend. Brady married Bundchen on February 26, 2009, and have two children together.

Bundchen opened up about her five-year relationship with Leonardo DiCaprio in something called “Porter Magazine.” In the article, Gisele reveals how despite being the most beloved and powerful supermodel on the planet and dating one of the most coveted men in the world she was still depressed.

While she was dating Leo the supermodel experienced panic attacks. “When I was going through my panic attacks, I didn’t even feel like I could share with anyone,” said Bundchen. “I thought maybe I don’t have the right, everybody is going through so many difficult things in the world, and I don’t have the right to feel this way. So I’d suppress it, and the more I suppressed it, the bigger it became.”

Keep in mind, this was the same time that Gisele was the highest-earning model in the world. Bundchen was the highest-paid model every single year from 2002 until 2017 when she was dethroned by Kendall Jenner. Gisele signed a contract with Victoria’s Secret worth a reported $25 million. In 2014, Bundchen made $128,000 a day. In 2016, Bundchen earned $30.5 million. Gisele Bundchen has a net worth of $400 million, whereas Tom Brady only has a net worth of $180 million.

RELATED: Gisele Bundchen’s Daily Routine Is All The Evidence I Need To Believe She’s An Alien

During her relationship with Leonardo, the Brazilian supermodel was prescribed Xanax by her doctor for her depression, but she didn’t want to take it. Instead, she altered her lifestyle and cut down on her workload and booze. “No longer numbing myself with smoking, drinking and too much work, I was becoming more and more aware of things that I’d chosen not to look at,” Gisele wrote in her new book.

At this time she realized that Leo wasn’t the right guy for her. “Was I alone in wanting to do some serious soul-searching while he stayed the same? In the end, unfortunately, the answer was yes,” the 38-year-old model said about breaking up with DiCaprio.

Gisele does mention her New England Patriot quarterback husband in her new book and says that he is more into clothes than she is. “I’m a jeans and T-shirt kinda girl. If you see me once a year at the Met [Gala] dressed up, it’s because I have to wear a dress, otherwise I’d show up like this. It’s so funny,” Bundchen said. “Tom actually loves clothes more than I do. Sometimes I’m like, ‘What is all this clothing that is showing up at my house?’ He just loves it.”

Tom apparently doesn’t trust his supermodel’s fashion style and rarely asks her opinion on clothing. “The only time he asks me advice about clothes is when we go to the Met Ball, and he wants to coordinate with what I’m wearing,” Gisele said of Brady.

Gisele did pay Brady some compliments other than he is a fashionista. “Tom is someone you can count on. It’s a quality I hadn’t experienced in any of my other romantic relationships. I love my husband – and most of all, I trust him. With Tom, who provides our family with a stable foundation, I’m able to create a home,” Gisele said.

The 44-year-old DiCaprio has rebounded pretty well since the breakup with Gisele. DiCaprio has dated models such as Bar Refaeli, Nina Agdal, Juliette Perkins, Lorena Rae, and is currently dating 20-year-old Camila Morrone.