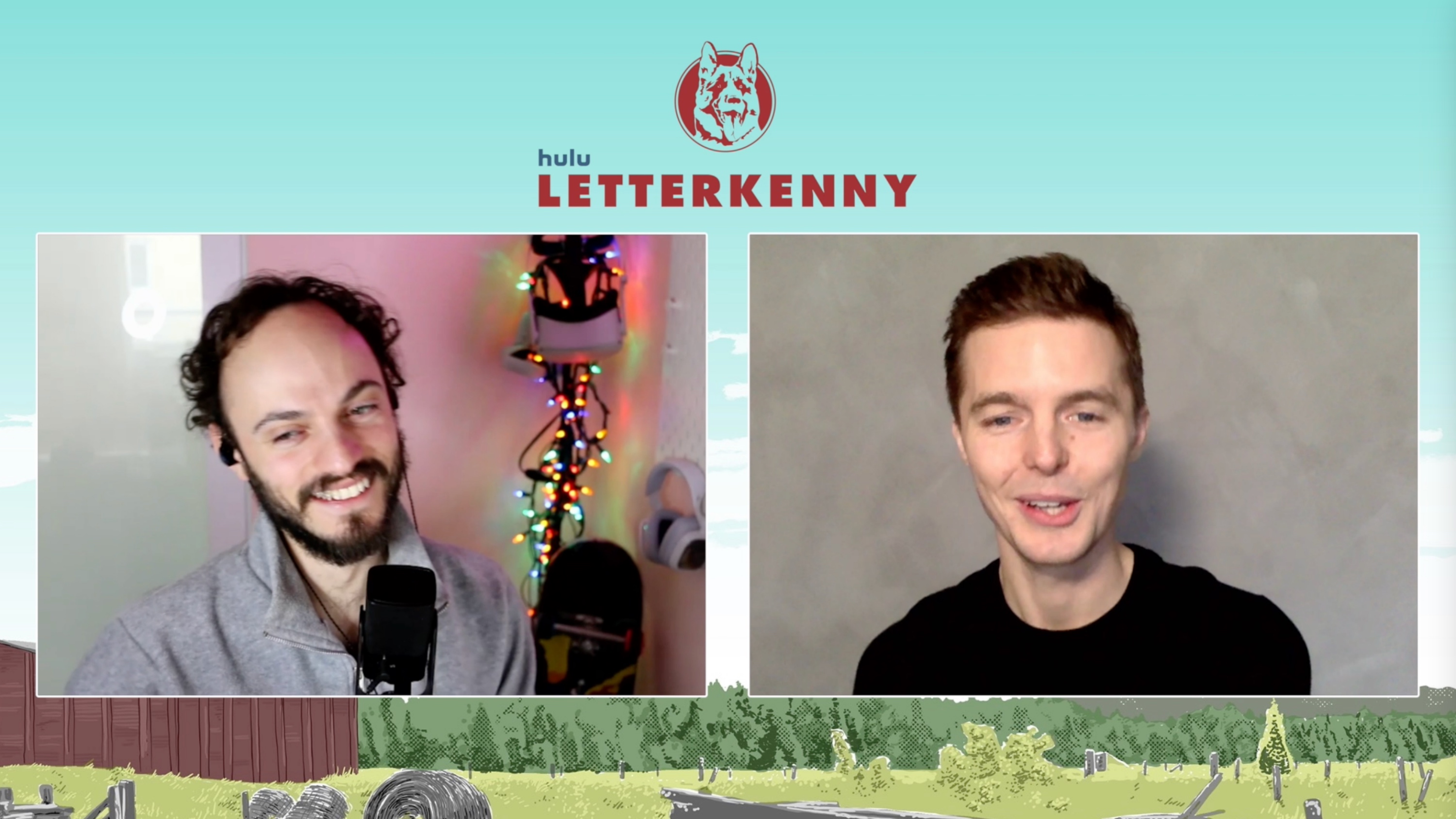 The 11th season of Letterkenny recently premiered on Hulu. I sat down with Evan Stern who plays Roald and Tyler Johnston who plays Stewart, collectively they’re known as The Skids, to discuss this most recent season and episodes past.

To kick off the interview, I asked them several of the Reddit’s most asked questions about Letterkenny and questions asked by fans in general. Questions like ‘why do most Letterkenny characters only have one name?’ and ‘why doesn’t anyone get arrested for fighting in the town of Letterkenny?’

We also discussed The Skids’ favorite episodes of Letterkenny. They touched on which characters they’d love to play if not their own. The Skids revealed which video games they are actually playing while the camera is rolling, who the biggest scene stealers are, and what their characters would get each other for Christmas.

Answering The Internet’s Most Asked Questions About Letterkenny

Here is the video and the full transcript is below:

Cass: Why do you think, other than Bonnie McMurray and Jim Dickens, who does nobody on the show have last names?

Evan Stern (Roald): Well, because we’re cartoon characters is how I feel about it. We exist in a world of like… ‘We are like Rick and Morty.’ We don’t have to fill in all the blanks for people, because I feel like everyone fills in a lot of it for themselves.

The people on the Reddit forums and stuff, they love talking about what people’s last names could be… They thought that Roald’s first name might be ‘Tad’. Because he was referred to as ‘Tad Roald’ in episode like two. But it was ‘Training Director’, right? That’s what ‘TAD’ is. So forever, people are like, ‘Oh, but his name is ‘Tad” and I’m like, it’s not, but that’s wild that you guys are talking about this.

Cass: How in this small town of Letterkenny that’s just full of fighting, why does nobody ever get arrested (for fighting)?

Tyler Johnston (Stewart): (joking) Because we handle our business ourselves and we don’t need any police involved.” … “We solve or problems and we help out our neighbors.

What Are The Actors’ Biggest Pet Peeves On Set?

Cass: As actors, do you have any individual pet peeves similar to the ‘dramatic inhale’ moment from this most recent season?

Evan Stern (Roald): Oh, absolutely. My biggest thing is that I hate when actors are clearly deeply influenced by other people’s acting styles. I could see a TV show where I’m like ‘Oh, you’re all acting in the same tone because you’ve seen other people acting in this tone.’

It’s a very specific nitpicky thing. But it happens a lot on television. And it deeply affects my watching experience, but I’ll watch the heck out of anything.

When The Skids are gaming on Letterkenny, what are they actually playing?

Cass: What video game(s) is it that The Skids are always playing on Letterkenny?

Evan Stern (Roald): What do you think, Tyler? What are they playing, as a video gamer (yourself)?

Tyler Johnston (Stewart): We were having Mario back in the day. We did Mario 1, 2, and 3. And we speed raced through those games.

Evan Stern (Roald): But not for real… I feel like we were playing Street Fighter or something, weren’t we?

Tyler Johnston (Stewart): Oh, what were we actually playing in the basement? I remember the one game we were playing on set, it was like a dungeon game or something.

Evan Stern (Roald): Tyler and Evan were (fighting over the controller), not Roald and Stewart. We were genuinely trying to play the game and they were like doing the takes. And they’re like ‘can you guys stop focusing on the video game so much? That’d be really nice. We have 20 minutes to get this scene.’

Cass: 11 seasons into it, if either of you could play another character on the show, who would it be?

Tyler Johnston (Stewart): You know who I think had a great season this season was Katie. And she’s been like the leader of the show in a not so overt way for many, many seasons. And yeah, I think she does a great job this season, so maybe… Maybe I’d say Katie.

Evan Stern (Roald): I’d want try maybe (Jim) Dickens just to see how it’s like to be up there. (To be) that tall. It would be nice to get into the view. I don’t know if that’s an option. Do I get the body of the person?

Do Letterkenny fans ever get too annoying in person?

Cass: How long into the show did it take you to grow tired of people yelling something like ‘Stewart’ at you. Sorry, I assume you’re accosted by fans with that nonstop, right?

Evan Stern (Roald): Oh, You know what? It’s all context-based. I love in real-life, it’s a delight. Because in real-life you’re like, ‘Oh, that’s so nice.’

And I always break it with ‘what’s your name? I’m Evan.’ Then we could have a little conversation and they’re like ‘whoa’. And we get to meet each other.

Tyler Johnston (Stewart): I don’t get it as frequently as some of my castmates because of the whole (Skids) get up so I’m not as recognized as frequently as some of my co-stars. It doesn’t bother me too, too, too much. If I post some on Instagram and stuff. But I don’t have it the same way as the ‘Stewarts’ and Katie with the ‘rocket’ stuff. If you look at comilla comments, it’s gonna meritorious.

The Magic Behind The Skids’ Dance Scenes

Cass: So, in the dance scenes. Do you guys just know how to dance as Skids? Were you bringing in Skids choreographers for those? Was it YouTube and that famous video (below)? Was it inspired by that and how much do you look forward to those days when the crew is like ‘alright boys, we’re just gonna get in costume and go dance in a parking lot today.’

Like at the very beginning of the show, it us to just be like ‘here’s a boom box’ and they’d press play and they record us for half an hour.

Tyler Johnston (Stewart): And just to add to that, they would have us dance in front of different cool backdrops or different sets. They’d be like ‘hey, this is a cool set. We just finished a scene. Let’s bring The Skids and maybe they can dance in front of this wall for while.’ And that’s literally how it started.

Then, throughout time it started to evolve a little bit. And Evan has actually choreographed a couple of the scenes in the past. And then of course that Lady C came in.

Evan Stern (Roald): Lady C is this local Toronto dancer, and she came in. She had an idea for a staged dance that we did. And then there was a bit of improv in it. But we rehearsed it 1 or 2 times on the day. She sent a video in advance. It was great. So much fun and amazing to work with a professional… for once.

Cass: Do you guys have any input on the costume choices? They stay similar year over year but are you ever like ‘I like this idea, let’s go deeper.’

Tyler Johnston (Stewart): Yes. Sometimes I’d say, if there’s something that we’re liking… There’s a couple scenes… I’m not gonna say what happens… (From) this season we shot recently…

But there’s some stuff that we dive into and if I want to dive a little bit deeper and maybe get a different trinket sewn to my outfit, I can request such a thing. But our wardrobe person Ginger Martini, is a freaking star.

She’s just a treat to be around. And she cares so much about the show. Usually, we throw it on (costume) and we have a couple of cool options that we could help pick. But it’s usually pretty much ready for us to go.

Evan Stern (Roald): Yeah and you always throw on the cost and you’re like… “Oh, so that’s what’s happening this season? Okay. I get it. Say less. 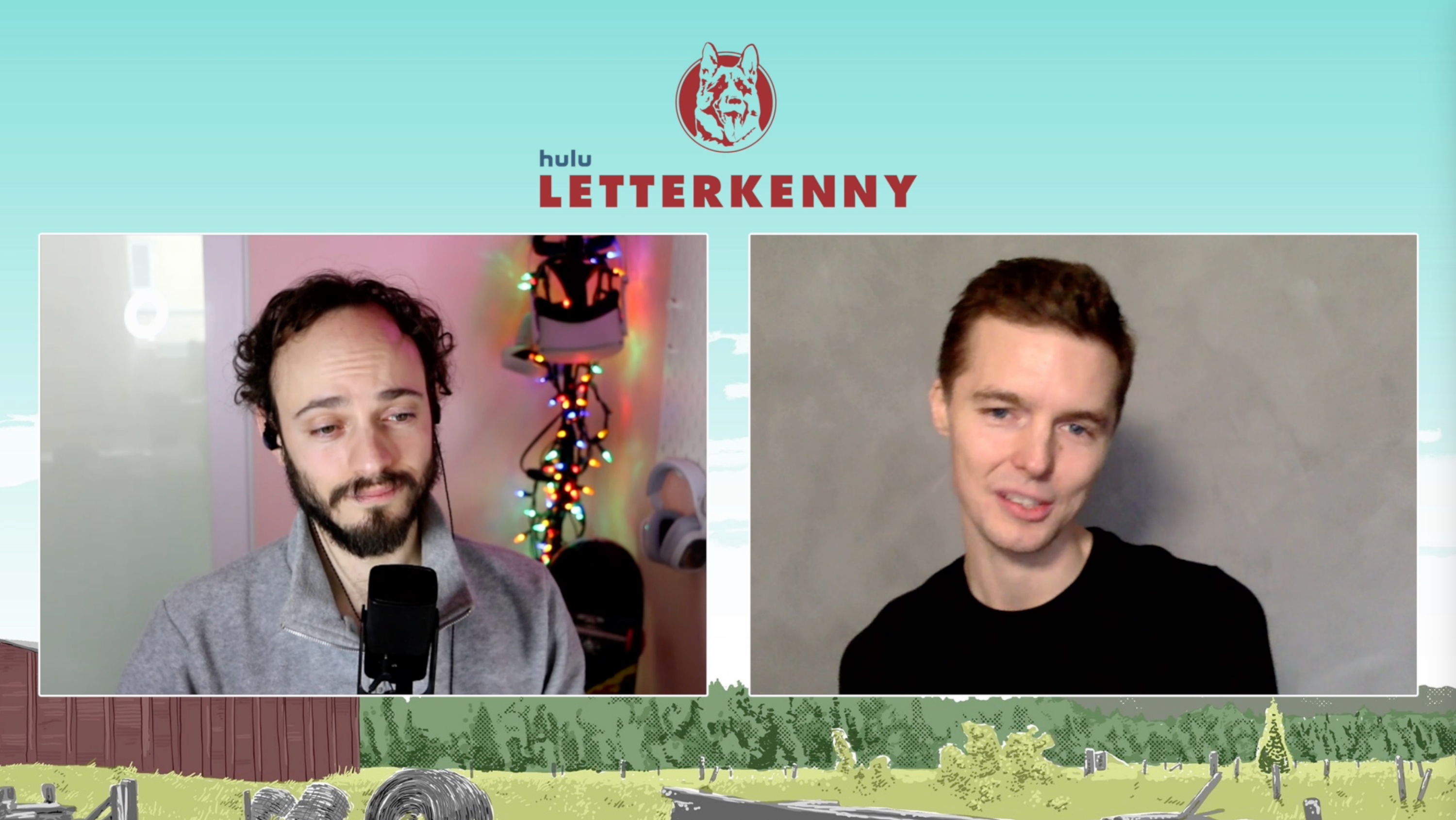 What are the Letterkenny episodes that deserve a sequel?

Cass: Looking back, 11 seasons, are there any favorite episodes and episodes you loved so much that you would want a sequel to at this point?

Evan Stern (Roald): I always loved… It’s so far back now at this point and I’m not even in the episode, but the ‘Super Soft Birthday’ (S01E02) episode, I think just touch so many people and it’s such an introduction and it’s like the second episode ever.

But I think those kinds of episodes in that vein, I would like to see more of those. I like the intimacy of those.

As far as my character Stewart, I really enjoyed the few episodes arc where I fell in love with Gae (10 eps, Seasons 3, 5, and 6), and then we went down to Toronto and she broke my heart. That was a really fun arc for Stewart and The Skids alike and my character in particular.

Cass: Who is the biggest ‘scene stealer’ amongst the cast?

Evan Stern (Roald): (speaking to Tyler) You’re always joking about how I’m trying to get in front of the camera…

Evan Stern (Roald): I’m just trying to do my job…

Tyler Johnston (Stewart): Jacob Tierney does a good job of stealing the show. Jacob who plays Glen and is also our director. He’s got the biggest ‘hall pass’, ‘green light’ that he could ask for. He could od whatever he wants. He does whatever he wants. I’d say probably, Jacob.

Evan Stern (Roald): Jacob, yeah, that’s a pretty good answer. I would say if not Jacob than someone who is unintentionally stealing the show, like Lisa Codrington (Gail) who is very big and funny. And when she’s on the screen it’s hard not to watch her.

Tyler Johnston (Stewart): And Dickens. Jim Dickens too… He’s a heck of a scene-stealer as well.

Cass: Are you guys friends off camera? Do you get to hang out when you’re not filming?

Evan Stern (Roald): No. I hate this guy. Umm. I think Tyler is fine. (Joking)

No, we unfortunately, live on the other side of the planet. He’s in Vancouver, I’m in Toronto. Whenever we link up though we have a great time, we go for beers, we hang out.

Evan Stern (Roald): He sends me texts All. The. Time. Okay? He’s one of those guys, he texts. I’m not a big texter.

Tyler Johnston (Stewart): If you want to get ahold of him, Cass, just go to his Twitch account and he’ll be on there.

Evan Stern (Roald): That’s true, I will be live and then you can talk to me Tyler.

Cass: What would your characters get each other as a holiday present?

Evan Stern (Roald): Sorry, all I thought about was a kilo of cocaine. All I can think about is drugs.

Cass: Has anyone ever suggested the use of meth as a form of method acting for your characters?

Evan Stern (Roald): Yes, they have. I… have not dabbled.

Evan Stern (Roald): Whereas Roald would fulfill all of Stewart’s wildest dreams and they would still be a 6 out of 10 according to Stewart.

Tyler Johnston (Stewart): Still not good enough! You’ve done everything on the list and you’ve still managed to fail…

You can stream Season 11 of Letterkenny on Hulu now! You can also follow Evan Stern on TikTok and Instagram and you can find Tyler Johnston on Instagram and TikTok as well.

READ NEXT: The Hockey Players From ‘Letterkenny’ Revealed Why The Fights Always End In Handshakes Instead Of Handcuffs