Incredible Story Of Marine Pilot Who Nearly Drowned At 30,000-Feet, Rode Thunder And Lived To Tell His Tale 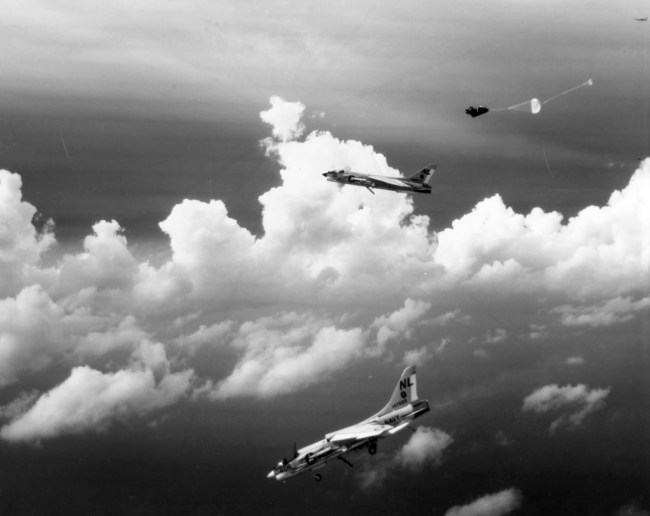 Lieutenant Colonel William Henry Rankin is the only known person to have nearly drown while in the sky. The United States Marine Corps pilot has one of the most astonishing stories ever, and he somehow lived to tell the tale.

Lt. Col. William Rankin was a World War II and Korean War veteran, who used his military training and instincts to survive one of the most brutal drops a human has ever walked away from. Rankin was flying an F-8 Crusader combat jet, a single-engine supersonic carrier-based air fighter plane. He was flying with his wingman, Lt Herbert Nolan. That’s when things turned terribly wrong.

On July 26, 1959, Rankin was flying in an F-8 Crusader from Naval Air Station South Weymouth in Massachusetts to Marine Corps Air Station Beaufort in South Carolina. At around 6:00 PM, minutes before Rankin was about to make his descent towards Beaufort, the pilot heard grinding sounds coming from his aircraft’s engine. The engine stopped, and a fire warning light flashed. Rankin pulled the lever to deploy auxiliary power, and it broke off in his hand.

Rankin’s F-8 Crusader jet fighter suffered a complete and total engine failure while flying at 47,000 feet in the air and traveling at 575 MPH. Rankin was forced to eject from the disabled aircraft while soaring nine miles above the surface of the planet.

Rankin’s oxygen mask kept him breathing in the rarefied air. But the pilot was not wearing a pressure suit, so once he ejected, decompression instantly caused blood vessels to burst. Blood poured out of his eyes, nose, and ears.

Most skydivers jump from 12,000 to 14,000 feet in the air, Rankin was at more than 40,000 and not wearing a pressure suit. His stomach began to swell to more than twice its size, and his nose had the feeling that it could erupt at any second. Rankin started wondered if the decompression would kill him.

Rankin also had to deal with temperatures of 65 degrees below zero. He lost one of his gloves while ejecting, and his left hand felt utterly numb because of frostbite. His arms and legs were burning and felt like dry ice was directly applied to his skin.

Then things somehow got even worse because Rankin was plummeting into the tumultuous belly of a powerful storm cloud. For approximately five minutes, Rankin had little to no visibility while in the dark storm cloud that blocked out the sun’s light.

Rankin’s parachute was supposed to deploy at an altitude of 10,000 feet, but the intense storm triggered the barometric parachute switch prematurely. The worst part was that the parachute opened up while he was literally inside of a turbulent thunderstorm. The Lieutenant Colonel was pelted by rain, hail, and lightning bolts were flying all around him as he glided through the cumulonimbus thunderstorm cloud. Strong updrafts in the storm cell decreased his terminal velocity at the worst possible time.

The storm overpowered the 39-year-old pilot and tossed the weightlifter around effortlessly. The winds threw Rankin over his parachute and spun him in circles causing him to vomit. “At one point, I got seasick and heaved,” he said. The storm pulled him into the air with updrafts and then Rankin plummeted as he landed on top of the parachute. Sometimes as much as 5,000 feet at a time.

Rankin said the lightning was blue blades that were several feet thick. “I’d see lightning,” Rankin told TIME Magazine. “Boy, do I remember that lightning. I never exactly heard the thunder; I felt it.” One lightning bolt struck his parachute, and Rankin thought he was going to be electrocuted to death.

The rain was so intense that he thought that he might drown and was forced to hold his breath. This Marine nearly died from drowning at 30,000 feet in the sky. There were also hailstones whizzing around that could have pierced through the parachute. Could you imagine the GoPro video of this extreme freefall?

Lt. Col. Rankin finally emerged from the frightening cumulonimbus tower, and somehow his parachute survived the wind, ice, lightning, and rain. Below Rankin was a rural area of North Carolina. Right when Rankin was about to land, a swift gust of wind threw him into a tree branch, and he hit his head on the trunk, but his helmet saved him from any real injury. His parachute got caught in the limbs of the tree, and he finally got himself onto the ground.

Rankin looked at his watch, and it said it was 6:40 PM. The Marine Corps pilot’s terrorizing freefall took an excruciating 40 minutes, and he landed 65 miles from where he ejected.

Bloody, battered, and bruised, Rankin emerged from the forest and searched for a road. He finally flagged down a driver who took him to the country store in the nearby town of Ahoskie, North Carolina. From there, he called for an ambulance and was taken to the nearby hospital.

Rankin had suffered from frostbite, welts, bruises, and severe decompression. But Rankin did not have any serious or longterm effects from his traumatic experience. He spent several weeks in the hospital, he was released and returned to service.

In June of 1960, Rankin released a book documenting his remarkable nose dive titled The Man Who Rode the Thunder.

In 1964, Rankin retired from the Marine Corps. Lieutenant Colonel William Henry Rankin died on July 6, 2009, in Oakdale, Pennsylvania, at the age of 88. But Rankin’s legend will live for generations.

RELATED: Could A Non-Pilot Land A Commercial Jetliner? Real-Life Pilots Weigh In