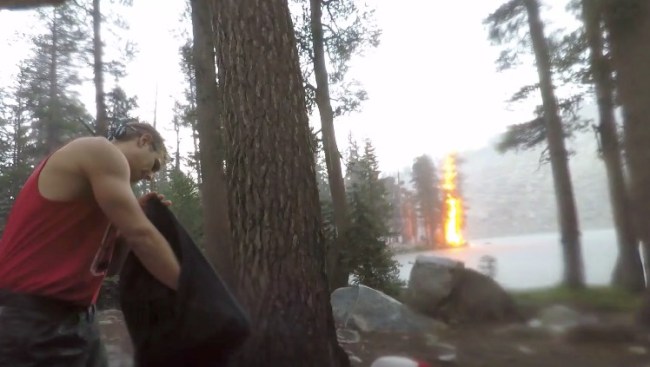 A 51-year-old father was on a camping trip in California’s Sequoia National Forest with his two kids when they found themselves amidst a storm. The dad, Chris Lovera, pulled out the camera to film a quick video with 12-year-old Aiden and 9-year-old Nadia while the rain started dumping and some lightning began to crash in the area.

The video abruptly ends, and the family blacked out what happened next. The kids woke up first, dad woke up with burns, and nobody remembers what happened. Miraculously, there was a camper on the other side of the lake whose camera was on. What happened is a lightning bolt hit the family and knocked them all briefly unconscious. The backpacker filming across the lake said it looked like the family had been ‘blown up’ from the lightning strike. Here’s that absolutely crazy footage:

The three were rescued by helicopter and flown to Community Regional Medical Center where they were treated for wounds.

So you can piece together the timeline, here’s that clip that Chris Lovera was filming with his kids when they were all struck by lightning and knocked unconscious:

Here’s what the dad had to say to the Monterey Herald about this bizarre incident:

“We didn’t hear, see or sense in any way that this had happened,” recalled Lovera. “It was so bizarre – from the moment we all have this collective memory of videotaping this torrential downpour – that’s kind of where everything stopped.”
“There was no real understanding of how we got hit,” said Lovera. “There’s this memory gap – there’s us being together – and the next moment.” (via)

The family is all healing from varying degrees of burns, with the 9-year-old daughter coming away from this with the most treatable burns and the father taking the worst of the lightning strike. This incident took place back on Labor Day weekend, and you can read more about it over on Grind TV.