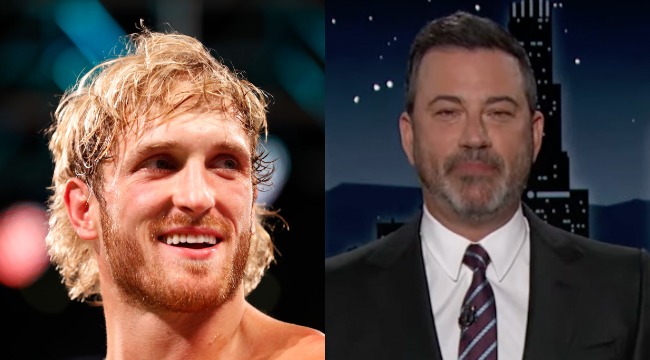 The Paul brothers are becoming the butt of jokes only stupid people laugh at.

I was one of those people, up until the younger Paul beat up a former UFC welterweight champion in front of Dave Chappelle and 16,000 others who sold out a professional sports arena.

RELATED: True Life: I Think I Like Jake Paul

But success brings scrutiny, and while the Paul brothers have each had their share of bone-headed moments, they’ve become so ubiquitous in the culture that they’re ripe for hackish late night jokes.

One of those knee slappers came from the mouth of Jimmy Kimmel who lumped Logan Paul in with Donald Trump during a recent opening monologue.

Context: Trump served as a guest commentator for the Evander Holyfield-Vitor Belfort fight on Saturday, September 11.

“Who would pay to listen to Trump BS his way through a boxing match?” he joked, “Between Logan Paul and Donald Trump, boxing is once again the top source of income for the very worst people in the world.”

Logan was not happy with Kimmel’s low blow, especially seeing as Kimmel invited him on the show in 2017 and Paul opened up about….losing “15 percent” of his left testicle.

“I feel like I’m a very easy butt of a joke,” said Paul at the 11-minute mark of the episode. “My name is just like thrown out there. … I’m upset with Jimmy Kimmel, dude, for real…[Kimmel] went on his show recently and made a joke, he said me and Donald Trump are the worst people on earth,” he told his co-host and his guest. “You fucking asshole, Jimmy Kimmel. Honestly Jimmy, fuck you bro. I’m not…fuck that. How are you about to invite me on a show, and have like a cordial, friendly, familiar relationship, and then a year and a half later…fuck you Jimmy Kimmel, why now?”

Logan Paul is disappointed Jimmy Kimmel destroyed him and is now in his feelings 🥺 pic.twitter.com/XPk8OHEmAn