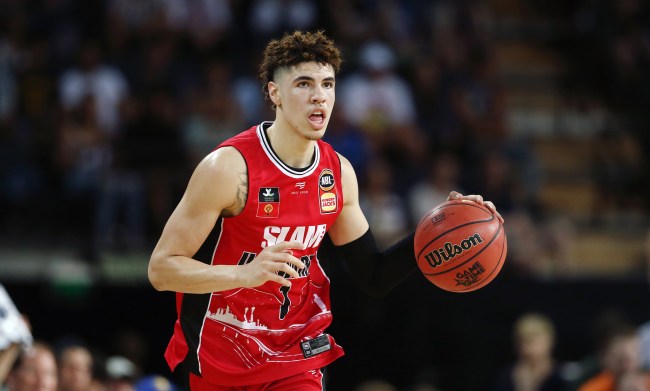 Just when we thought it was safe to follow the NBA again and things had started to die down a little bit with regard to the Ball family being in our faces all the time, the GOAT Michael Jordan and his Charlotte Hornets go and draft LaMelo Ball with the third pick in the 2021 NBA Draft.

Now we’ve got the Ball family patriarch LaVar Ball feeling his oats, re-issuing his absurd belief that he can beat Michael Jordan in a game of one-on-one, and Lonzo showing up on TV shows like The Masked Singer.

So much for Lonzo’s move to New Orleans from Los Angeles reducing the Ball family’s Q rating, huh?

Speaking of Lonzo Ball, this week during an interview on J.J. Redick’s podcast, the eldest Ball brother issued a little warning to little bro LaMelo in anticipation of their eventual first meeting on an NBA court.

Related: LaVar Ball Claims The Only Downside To His Sons’ Fame Is Profound Loneliness: ‘You’re Never Going To Meet A Good Woman’

“We’ll see. We’ll see if my name is matched up against his,” Lonzo said about the first time his Pelicans play against LaMelo’s Hornets, “I know his game pretty well, so it might be a tough night for him.”

The 2020-21 NBA schedule hasn’t been officially released yet, but we do know that the Hornets and the Pelicans will play twice during the upcoming season based on the parameters the league has shared. They should be a must-watch whenever they happen.