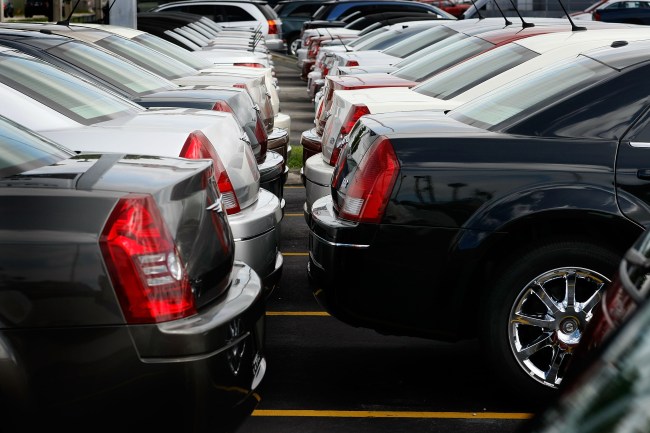 A San Leandro, California Dodge dealership was hit pretty hard by looters over the weekend as 74 cars were stolen during the protests in the area.

Cell phone videos posted on Facebook shows what happened Sunday night at the dealership and the footage is pretty wild. In the video, you can see brand new dodge cars and trucks screeching out of the lot and onto the busy street.

According to the dealership owner, the looters broke into the lockbox inside the store and began hitting alarm buttons to see what key belonged to which car.

San Leandro Chrysler Dodge is open for business after one of the largest auto theft sprees in memory.

“Pisses you off man. You walk in it’s like a war zone,” said dealership owner Carlos Hidalgo.

By the time it was over 74 vehicles were gone.

Hidalgo said as a precaution against thefts he had parked cars at all the lot exits. It didn’t matter.

“They started ramming, ramming until they could get out. They took out chains and fence posts. It was a very malicious act.”

Thieves broke into the showroom, got the lockbox open, and took the car keys, hitting alarm buttons to see what key went with which car.

The Dealership owner goes on to say they’ve only recovered 15 of the 74 cars stolen so far and have estimated the losses at $5 million.

Police say they have recovered at least 15 cars. Some in the Bay Area and some 150 miles away in Kings County. Many have been chopped for parts.

“As we are getting them back I’ve got cars without engines,” said Hidalgo,
That could be because many of the stolen vehicles have high-performance engines called Hellcats.

The dealership says it has hired armed guards for the foreseeable future. Losses and damage is estimated at $5 million.