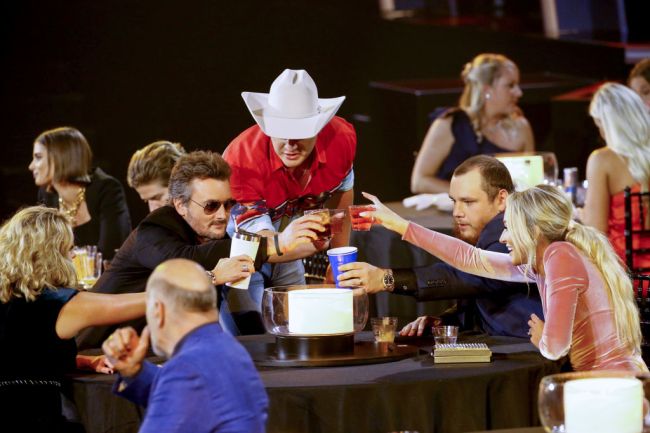 Luke Combs and Eric Church are cut from the same cloth. They both grew up in North Carolina, attended Appalachian State and went on to become superstar country musicians.

As a result, Combs has always looked up to Church.

The two have become good friends over recent years and both guys know a thing or two about putting back a drink or two— or three or four or five or six or ten. That combination of factors led to a hilarious story about the first time that they hung out.

In conjunction with CMT’s Artist of the Year special, Combs detailed the encounter and it ended with him getting sloshed on some (probably very nice) whiskey and puking all over the street.

Church invited Combs and his wife Nicole over for a steak dinner. But while everybody else was drinking wine, Combs was drinking whiskey.

The difference in drink resulted in him reaching a different level of buzz.

“Whiskey has just a tad more alcohol than wine does so I was on another plane of existence that evening than I think everybody else was,” he said. “They made sure our glasses full the whole night, there’s no doubt… which you’re not gonna say ‘no,’ at that point, you know? You’re gonna have a good time… I’m not scared of a refill.”

Although “I’m not scared of a refill” is an all-time quote, it didn’t work out in his favor that night.

When the night ended around 4:30 a.m., Combs called an Uber. He made it to the car, but he had to ask the driver to pull over shortly after leaving the driveway so he could puke in the middle of the road.

Combs joked that Church may not have heard that story yet, so he hopes he never sees his retelling.