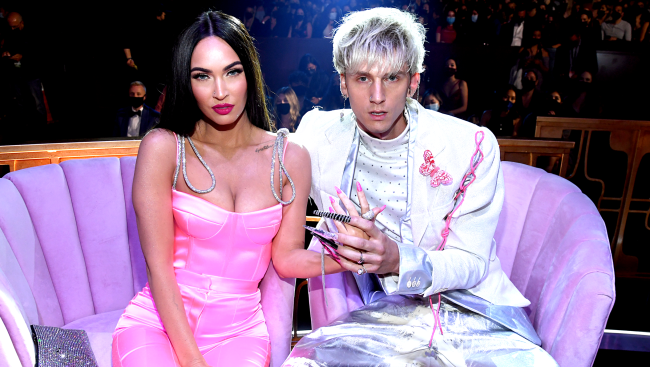 Machine Gun Kelly is no stranger to controversy and is once again in the headlines as over the weekend he was pelted with bottles and tree branches as he flipped off the crowd at the Aftershock Festival in Sacramento.

During his set, one audience member even lobbed a log at him as he performed on top of a tent in the middle of the crowd.

The anger with Machine Gun Kelly, real name Colson Baker, may have stemmed from his recent comments about Slipknot frontman Corey Taylor. Either that or the fans in attendance just detest his music. One of those things.

At Riot Fest in Chicago in September, MGK ripped Slipknot, who was performing on another stage at the same time as him, shouted to the audience, “Hey, you want to know what I’m really happy that I’m not doing? Being 50 years old wearing a f—ing weird mask on a f—ing stage, talking sh-t.”

Taylor had previously shaded MGK in a February interview in which he said, “I [hate] the artists who failed in one genre and decided to go rock—and I think he knows who he is.”

Many fans didn’t take too kindly to MGK’s remarks about Taylor and his band, and apparently, still aren’t happy about it.

As punters gathered around the stage and hoisted their middle fingers in the air for the musician to see, MGK declared he would carry on the performance for the fans who had turned up to support him. Sat on a tent, the rap-rocker opened up about how he felt in regards to playing the event, acknowledging that the last festival crowd he played in front of (Louder Than Life) hadn’t been thrilled to see him. “How the f–k you feelin’ Aftershock?” he began, while introducing the set. “Mixed opinions. I love you so much. This morning I was like, ‘Do we get on the plane and go to this?’”

However, MGK went on to reveal that it was a young fan that motivated him to attend and perform at the event. “I was sitting there thinking about the last festival we did where this 10-year-old got her poster ripped up just for liking me,” he said. “I’m doing this show for her and everyone who came to see us.”

Take a look at the wild scene in the videos below…

Related: Megan Fox And Machine Gun Kelly’s Quotes About Their Love Are What An Acid Trip Feels Like

This isn’t the first time Machine Gun Kelly has gotten into with the audience of late. He was also booed relentlessly during every song he performed and flipped off by fans at the Louder Than Life festival in Louisville. He even got into a bit of a shoving match with a fan at that event.

MGK was also on the receiving end of a loud “F–k MGK” chant during Knotfest Iowa during a Slipknot performance a couple of weeks back.

Love or hate him, you have to admit, the guy certainly has learned a few new tricks about how to stay in the public eye.