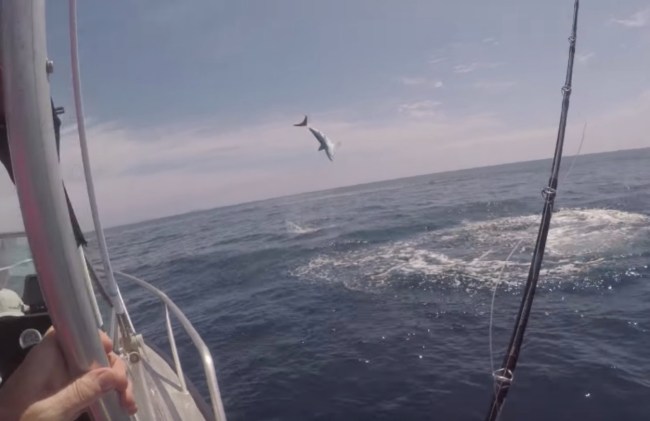 You never know what you’re going to see when you head offshore for a fishing trip. The creatures lurking in deep water are fast, strong, and they’re not accustomed to being tussled with by human beings.

This crew was fishing near Castle Rock off the east coast of the Coromandel in New Zealand when they hooked up to a screamer. Before they knew what was happening a mako shark was doing crazy ass flips right next to the boat in an effort to throw the hook.

According to the description of the YouTube video, they were dropping baits below a bunch of action on the surface in an effort to catch some snapper. The mako shark gobbled up one of the pilchard baits and then absolutely nuts, putting on an aerial display that nobody expected to see. The GoPro didn’t even start rolling until after the shark had already jumped twice but you can see the splashes of where it jumped in the water.

Mako Sharks are 100% the most acrobatic fish in the ocean. They’re famous for their backflips and high jumps into the air. They are some of the fastest creatures in the ocean and this means they’ve got the ups to pull off some crazy maneuvers. Let’s check out the action:

Here’s the description from the YouTube video via ViralHog:

“My brother-in-law and I were fishing out by Castle Rock off the east coast of the Coromandel in New Zealand. There was a lot of surface activity of fish feeding on smaller fish, so we were dropping baits below them to try and catch Snapper, which would be feeding on scraps and remains. Whilst floating down a pilchard bait, a Mako shark that appeared to be over 6ft took his bait and went nuts jumping in the air to try and throw the hook. The shark did two jumps towards the boat before I got the GoPro going. You can see the two splash marks in the first few frames of video.”

Just once I’d like to see one of these batshit crazy mako sharks jump into the boat and watch as all hell breaks loose. I’m sure it’s happened plenty of times throughout history but I don’t recall ever seeing this go down with the camera rolling.

For more on this, you can check out For The Win’s article.