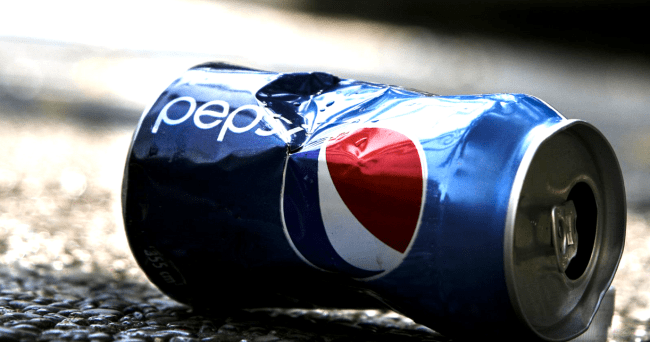 A man in the United Kingdom who was addicted to Pepsi says he spent around $8,500 a year on his unusual 30 can a day habit.

41-year-old Andy Currie, a supermarket worker, says he has finally gotten over his Pepsi addiction which lasted 20 years and cost him not only thousands of dollars, but also his health.

Currie, from Bangor, North Wales, estimates that since he began his unhealthy Pepsi habit in is twenties he has sucked down somewhere in the neighborhood of 219,000 cans of the soft drink.

The breaking point came after he ballooned up to 266 pounds and doctors warned him that his health was in jeopardy with diabetes, heart disease and potential pancreatic cancer all being potential results of his habit.

“I’ve always loved the taste of a cold Pepsi. Nothing could beat it and I just got hooked,” he told the Mirror.

“I work nights so always liked the sugar rush to keep me going. I’d go through four or five two liter bottles of Pepsi every day.”

Currie says where he worked contributed to his Pepsi habit

“Because I work at Tesco I could just buy it straight after work and take it home,” he said.

Due to the easy access to the soda because of his occupation, his habit was also costing him financially.

“It cost me a fortune to be honest,” said Currie. “I could have bought a car every year for the same amount I was spending on Pepsi.

“I just needed to have it, as soon as I woke up I’d go to the fridge and pour myself a large glass of Pepsi and just carry on through the day.”

Currie says he finally broke the habit when he saw a therapist and hypnotist, David Kilmurry, who diagnosed him with avoidant restrictive food intake disorder.

“David met me online and hypnotized me for about 40 minutes. I don’t know what he said but afterwards I just didn’t want to drink it anymore,” said Currie.

Now, he says, his skin looks better and he has significantly more energy. He also says water is now his drink of preference.