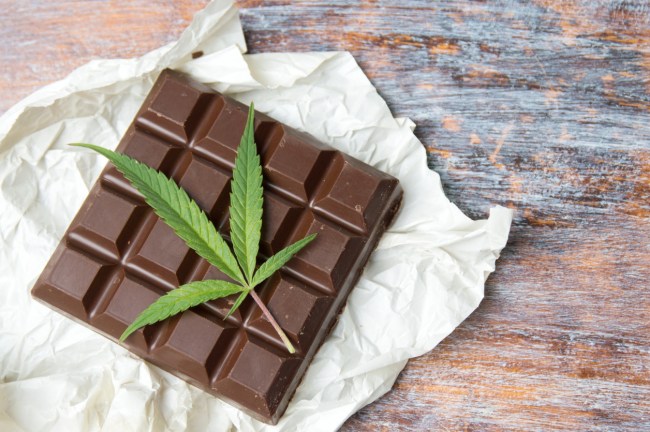 A man battling stage 4 cancer tried to self-medicate with marijuana edibles, but was arrested and sentenced to four years in prison for his drug habit.

Thomas J. Franzen is suffering from stage 4 testicular cancer that has since spread to his lungs and abdominal cavity. Franzen also has a reoccurrence of renal cell cancer in one of his kidneys. To deal with the pain of his cancer and chemotherapy treatment, Franzen ordered THC-infused chocolates. Sadly for Franzen, he lives in Montgomery, Illinois, and purchased the edibles from a cannabis dispensary in California.

Franzen ordered 42-pounds of THC-infused chocolates so that he could self-medicate. In 2014, the 37-year-old cancer patient from the suburb of Chicago was caught buying the weed products and now faces a prison sentence of four years.

In February of 2014, postal workers alerted authorities of the cannabis shipment of 430 individually foil-wrapped THC-infused chocolate bars. Police obtained a warrant to search Franzen’s home based on the large supply of THC. Authorities found 100 additional grams of marijuana and cocaine. The Illinois attorney’s office also discovered items “known to be evidence of drug dealing,” included a digital scale, more than $2,000 in cash and postal receipts for packages he had mailed to locations across the U.S. and Canada.

Franzen, who does not have any previous criminal arrests, pleaded guilty to a reduced charge of possession of more than 5,000 grams of cannabis, a felony that has a prison term of between four to 15 years. The charge is also eligible for probation.

The judge sentenced Franzen to four years in prison. Franzen must return to court on June 14 where Judge Clint Hull will examine his medical records and rule on when he will begin serving his prison sentence. “If he’s able to go in (prison), the judge will take him in,” Camic said. “If he needs more time, the judge will give him time.”

“He’s relieved to have it over. He wishes he could have done probation so he could maintain his course of treatment,” Camic said.

Franzen also can have his prison term cut in half for good behavior. Let’s hope that Franzen can battle through his cancer to get through all of this.

In August of 2013, then-Governor Pat Quinn signed the Compassionate Use of Medical Cannabis Pilot Program Act, which legalized the cultivation, sale and use of medical pot in the state. However, the state didn’t start accepting applications for patients, vendors and growers until September of 2014. Recreational use of cannabis will become legal in Illinois on January 1, 2020.

A Montgomery man who ordered a 42-pound bag of marijuana-infused chocolates to self-medicate as he battled cancer was sentenced to four years in prison, his lawyer said.
Thomas J. Franzen, 37, pled guilty to a reduced charge …- https://t.co/uv5tS5a6Tw –#weed #cannabis #CBD pic.twitter.com/6Pv3idCnRL