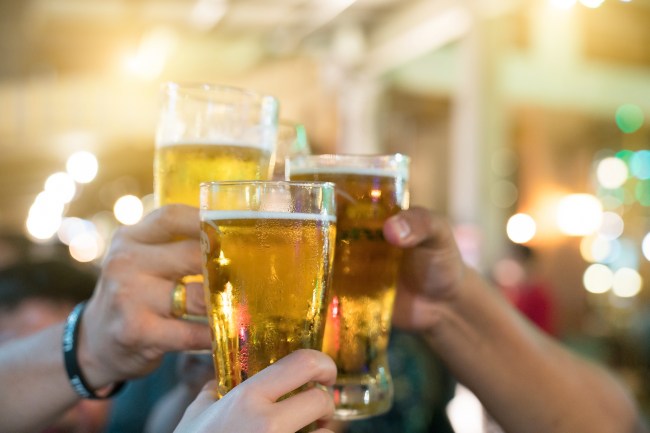 News broke this week of the virtuous man who has committed to himself to God during Lent by taking on a diet consisting of primarily beer.

Del Hall–an employee at Fifty West Brewing Company in Cincinnati, Ohio–decided to adopt the methods of 17th century Bavarian monks who once brewed beer specifically for a liquid-only Lenten fast.

The Army veteran began on March 6th, Ash Wednesday, and in just over one week, he’s shed over 17 pounds by having anywhere from two to five beers a day. He began the mission weighing 292 pounds, he’s now down to 275.

Speaking on his YouTube channel, Hall explained that his addiction to food was the genesis behind his decision to give it up for 40 days, and after the first few days of intense food cravings, he was able to more easily resist the temptation to “bash some Taco Bell after a few beers.”

“I’m down 15.6 pounds already – that’s crazy. This isn’t about the weight loss, this is about my journey and about breaking an addiction to food – and about trying to challenge myself and replicate what the Monks did.

“It’s still super cool to be able to lose 15.6 pounds. I’m not calling this the ‘Beer Fast Diet’ or anything like that but it’s super cool to see that number on the scales.

“I’m having anywhere from two to five beers a day. I’m not necessarily drinking in the morning, I’m not a breakfast person. So I get up, I have some water, I have a black coffee – no sweetener, no dairy, nothing in it, just black coffee.

“I normally have my first beer some time in the afternoon and I might have one whenever I’m feeling a bit peckish. The majority of the beers I’m drinking are at home. When I get home at night I might have two to three beers at the house and that’s pretty much a typical day.”

Hall claims that the benefits from his unique diet have been life-changing. He told the Cincinnati Enquirer that he “feels amazing” and feels like a “mental fog has been lifted.”

As it stands now, Hall claims he’s “over the hump” with his hunger cravings and hopes to shed more weight simply by slugging brews.