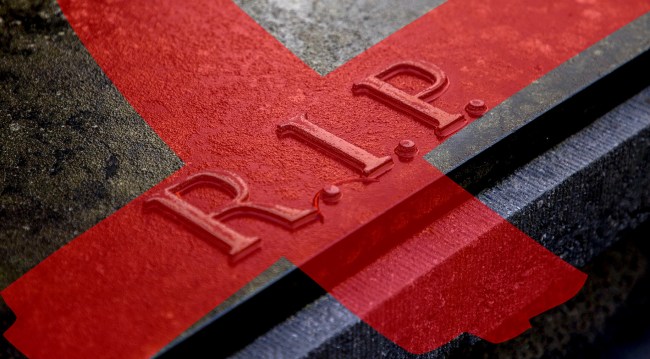 Residents of Richmondshire in North Yorkshire in England received quite a shock while attending a press conference called by police to help in the search for 80-year-old Harry Harvey, who was presumed to be dead, when Harvey showed up in a Land Rover very much alive.

When he arrived Harvey, from Tynemouth, Tyne and Wear, England, said he had spent three days hiking the Yorkshire dales, surviving on cans of beans, losing his glasses in a fall, and dealing with stormy weather, but other than that, he was good.

We are currently trying to locate Harry HARVEY (80) who has been reported missing.

Please call 101 if you think you may have seen him

According to The Guardian…

His family, from Tynemouth in the north-east of England, had planned to appeal for members of the public to help in the search at a police press conference organised at the Tan Hill Inn near Keld later in the day.

But as it was about to begin, Harvey turned up in a Land Rover with mountain rescue workers, before tearful members of his family – including his son – ran over to embrace him.

Speaking to reporters from inside the pub, Harvey – wearing a large bandage on his forehead – said he had been separated from his organised walking group during a heavy hailstorm and had spent “three good nights wild camping”.

“Where we got separated was absolutely desolate, there was no chance of putting a tent up that’s for sure. So I had to find somewhere safe,” he said, insisting that he had not been in great danger.

“I’d got all the kit, all the training,” said Harvey. “The biggest problem I had was getting to Tynemouth from Keld because I only had £21.05 in me pocket.”

Prior to his surprise return, North Yorkshire policing inspector Mark Gee had feared the worst, “We have growing concerns for his safety and welfare and will continue to put all our efforts into further searches tomorrow.”

As many as seven mountain rescue teams had been assisting in the search for Harvey over the three days he was missing as police reportedly feared he was dead.

In his only broadcast interview, Harry told me for @itvtynetees and @itvcalendar that he'd enjoyed "three really good wild camping nights".

Following the harrowing ordeal, Harvey revealed, “I fell crossing a bridge over a stream. It was a tree across a stream with a mink trap on it, I stepped over the trap and went down and banged my head, which I patched up myself,” then added, “I rang my wife when I was found – I didn’t give her chance to get angry with me, I put the phone down before she could be.”

No wonder Harvey survived. The man is a freaking genius.

Between Mr. Harvey and 59-year-old Jonathan Ceplecha who survived four days – more than 100 hours – trapped underneath a giant fallen oak tree by eating plants and insects within his reach and drinking rainwater and his own sweat, it’s been quite a week for the triumph of the human spirit.