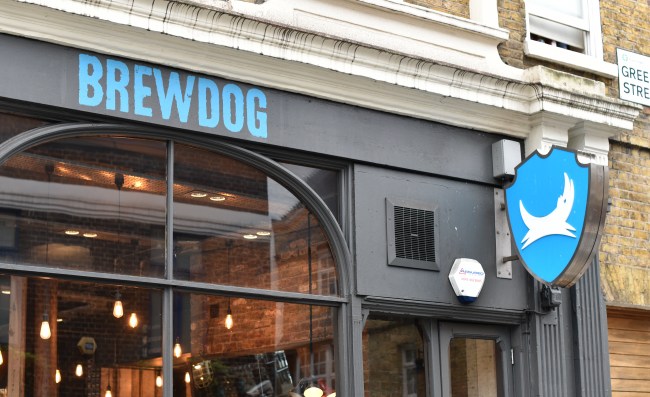 When Scottish brewery BrewDog rolled out a satirical marketing campaign to draw attention to the ongoing global wage gap, the last place they thought it’d land them was in a courtroom, never mind on the losing end of a lawsuit.

But, sometimes the big dick of the law will slap you in the face even if your intentions are noble, and BrewDog is likely still reeling from the mushroom stamp.

Last year, BrewDog, which was founded in the UK and has a location in Columbus, Ohio, temporarily rebranded their flagship Punk IPA as Pink IPA in celebration of International Women’s Day 2018. In doing so, they replaced the beer’s blue labels with pink ones and offered the beer at a 20 percent discount to women.

This is not ‘beer for girls’. This is beer for equality.

Not so fucking fast said Dr. Thomas Bower, a 27-year-old software engineer who went to BrewDog’s Cardiff bar to purchase the Pink IPA. Instead, Bower was sold the Punk IPA for £5 instead of the discounted Pink IPA price of £4.

After a bit of a back and forth [with the bartender] with me protesting this, I felt forced to identify as female and was then able to get the drink for £4. I complained to the company about this and they said it wasn’t discrimination because the price difference was part of a national campaign to raise awareness about the gender pay gap. Not satisfied with this, I complained again to Brewdog stating that I was intending to take them to court over this but would rather resolve the problem outside court. They ignored this.

Ninety nine percent of people would have just paid the extra Euro and drank the damn beer. Of the one percent remaining, .99% would have just given the bartender shit for a minute or two and forgot all about it the next day. Dr. Bower, the .001 percent, decided to fall on the sword and take BrewDog to small claims court over the alleged discrimination after saying that he’d drop the claim if the brewery issued him a formal apology. That did not happen.

What’s crazy is that District Judge Marshall Phillips sided with Bower, finding “it is clear that in this case the claimant has been directly discriminated against by the defendant because of his sex.” The judge also added that Bower could have felt “humiliated” and it was “not a pleasant experience for him.”

Representing himself in court, Bower was awarded £1,000 in damages. You’ll never guess where he donated half the proceeds to: a women’s equal pay charity.

“After taking into account my costs, I donated equal amounts of this award to the Young Women’s Trust, which aims to help women negotiate for better pay, and the Campaign Against Living Miserably, which runs a male suicide prevention line, among other things.”

Sooo, I guess Dr. Bower didn’t loathe the cause BrewDog was championing, he just wanted the credit for it. The dude’s playing chess while we’re all playing checkers. No choice but to respect it.