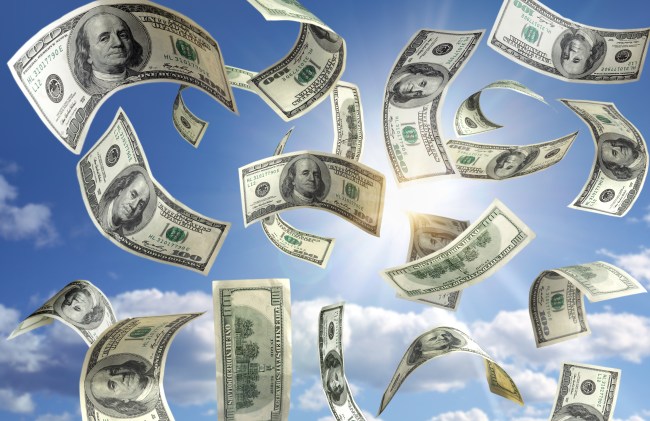 Money falling from the sky

Every time I think the world needs a new plague, a Good Samaritan reminds me that there are still people out there who represent the virtuous morals of our founding fathers.

And for an unemployed New Jersey man, a person’s good deed benefitted him to the tune of $273 million.

Mike Weirsky, 54, hit the Mega Millions jackpot last Friday at a Quick Check store in Phillipsburg, near the Pennsylvania border.

Weirsky’s good fortune would have never come to fruition if it weren’t for the kind soul who returned the tickets he bought and accidentally left at the store a day earlier.

According to NBC New York, Weirsky, who opted to take the $162.5 million lump, claimed he forgot the tickets at the counter because he was too focused on his cell phone. Someone found the tickets and gave them to the store to hold. Weirsky returned to the store on Friday and verified the tickets were his and store employees returned them.

Lottery officials say that if the person who found them the tickets had kept them and signed them, they would have been entitled to the $273 million. OUCH. FUCKING. OUCH.

“I’m looking for the guy that handed them in, I want to thank him,” Weirsky said. “I’m going to give him something, but I’m going to keep that private.”

The only one who may feel shittier than the person who unknowingly handed over a quarter billion is Weirsky’s ex-wife, who divorced him in October after 15 years of marriage.

Eileen Murray worked as a cost analyst for a utilities company and had been supporting her unemployed husband for years, even shelling out monthly spousal support for her husband.

Murray told the Post that Weirsky is “not appealing to me ll of a sudden because he has this money” and claimed she will not be asking for a handout. With that said, she certainly believes she’s entitled to some cheddar.

“You tell me what’s the moral thing to do.”

As far as what the new multi-millionaire is going to do with the money: The first thing he’s going to do is buy a new pickup truck, then buy his mother a new car and pay to remodel her home.

“I always wanted to know what it would be like to be able to just wake up and decide to go somewhere or go buy something and just do it,” he said. “And when I get the money I’m gonna go ahead and do that.”

I need to know how much money he gives to the Good Samaritan and his wife. Anything under $5 million a piece is a fucking crime.

GOLDEN TICKET: Mike Weirsky, a New Jersey man and the jackpot winner of the $273 Mega Millions lottery ticket, came forward Thursday, saying he's going to "sit back and enjoy" the cash after first buying a new pickup truck and listening to his lawyers. https://t.co/SmmaFUwNPA pic.twitter.com/6Lqjcec1Em