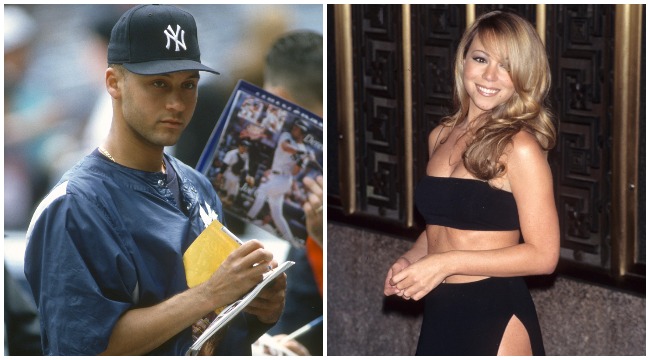 Jeter, now a husband to Hannah Davis since 2014, has probably forgotten about more hookups than most people could dream of, so Mariah Carey’s revelations in her new memoir may be just as new to him as it is to you and I.

In her forthcoming memoir, “The Meaning of Mariah Carey,” the 50-year-old Grammy winner reveals that she penned not one, but two songs about the Yankees legend.

The first, 1997’s The Roof, memorializes a rendezvous she had with a young Jeter on the roof of his apartment.

In an interview with Vulture, Mariah reveals how she met Jeter at a dinner party and started flirting secretly via text while she was on the tail end of a tumultuous marriage with music executive Tommy Mottola.

“Of course I do! I can never forget that moment,” she says. “I mean, it’s not like it was some intensely deep, intellectually stimulating — again, it was a great moment, and it happened in a divine way because it helped me get past living there, in Sing Sing, under those rules and regulations.” When she belts, “I’d risk my life to feeeeyall / Your body next to mine,” in “My All,” it’s because she really was risking her life to have a night with Jeter in Puerto Rico, she says.

“Sing Sing” is Carey’s nickname for Mottola’s home, a reference to the New York prison of the same name. Carey claims Mottola was like an “oppressive humidity” that she felt she could never escape. They divorced in 1998 and Mariah would go on to claim Mottola then tried to sabotage her career.

In her second song about Jeter, 1997’s My All, Mariah claims she risked it all to have one night with Jeter in Puerto Rico.

“I’d give my all to have, just one more night with you,” Carey sings in the song. “I’d risk my life to feel, your body next to mine.”

imagine my all and the roof written for YOU by MARIAH CAREY??? how lucky derek jeter is chile 😭😭😭 pic.twitter.com/dK3s7iB2zr

I can’t even get my wife to look at me like Mariah’s looking at Jeets in the photo above, never mind write and release two songs about me after what sounds like a sloppy rooftop hookup.

The power of Jeets can never be overestimated.

P.S. Hannah Davis must be turning to Jeter right now like, “I just think it’s funny that…”