Man Creates Ingenious ‘Glitter Bomb Trap 2.0’ To Destroy Thieves Stealing Packages And He Even Gets Macaulay Culkin To Help 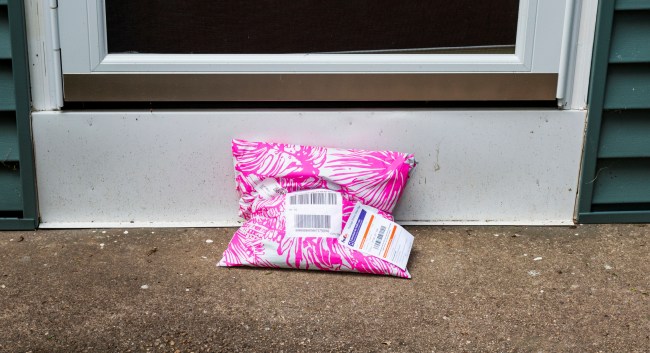 It’s a rare day when you can get me, ‘Cass Anderson, Professional YouTube Video Watcher™’ to pay attention to a video longer than three or four minutes. I have the attention span of a toddler. It’s possibly an occupational hazard caused by spending the last decade plus pouring over a never-ending supply of viral content every day on the Internet to find you bros the best stuff. But this video, it’s really good.

This began back when NASA engineer Mark Rober captured footage of a thief stealing a package from his porch, brought it to the police, and they did nothing. Absolutely nothing. This is the norm for anyone who’s ever had packages stolen off their front porches and contacted the police. Nothing happens, ever.

So, to get even, this man who worked in NASA’s Jet Propulsion Laboratory for 9 years created a ‘Glitter Bomb’ loaded up with glitter (obviously) and a devastating fart spray.

He describes last year’s design as ‘a bit of a rat’s nest’ so this year he completely redesigned his Glitter Bomb Trap 2.0, enlisted the help of Macaulay Culkin aka Kevin McAllister who served as the inspiration for all of this, and he unleashed this year’s devilish creation on package thieves to exact his sweet, sweet revenge. If you’ve ever had a package stolen then this is that YouTube therapy you need injected straight into your brain.

I have the luxury of working from home these days and I have a Ring Smart Doorbell. So when I receive a package I hear the doorbell ring, get a notification on my phone, and walk 50 feet to the front door. On top of that, my neighborhood is straight up full of cops. Seven of the 40 houses in my neighborhood have cops living in them, all cops who park their police SUVs in their driveways or the street. A thief would be idiotic to try and pull this shit around here.

But when I was living in NYC my packages would ‘get lost in transit’ almost once a month. Our packages would just be left in my building’s hallway, a hallway that happened to share a random ass bathroom in it that was used by two cafes. Those packages would disappear on the regular and there wasn’t a single damn thing I could do about it.

So, for me, to see these random ass thieves served up a XXL-sized plate of vigilante justice feels pretty damn good. I got to the point where I actually stopped ordering anything from certain retailers because those packages would always go missing and after a while one of the company’s even accused me of fraud which was straight-up bullshit.

I still cannot wrap my mind around why these thieves aren’t prosecuted when there’s all the evidence in the world. It’s infuriating.

Mark has some other pretty badass videos on his YouTube channel you should check out. I’d start with this viral clip where he tests whether or not sharks can smell blood:

This man is a genius.