Mark Zuckerberg Says Some Meta Employees ‘Lovingly’ Refer To Him As The Eye Of Sauron, The Literal Symbol Of Evil In ‘Lord Of The Rings’ 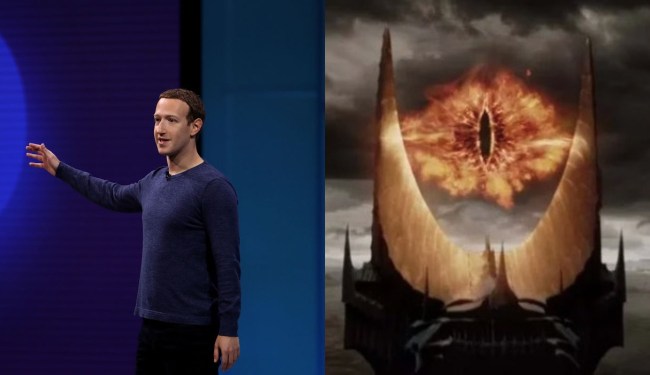 Mark Zuckerberg is still only 37-years-old? Can you believe that? It feels like this guy has been in his 30s for 15 years.

Despite the fact that he’s now approaching 40-years-old, though, I’ve got my doubts that the billionaire CEO of The Artist Formerly Known As Facebook has ever actually seen or rea The Lord of the Rings based on his recent revelation about the Eye of Sauron.

During an interview on The Tim Ferriss Show, Zuckerberg revealed that “some of the folks” he works with “lovingly” refer to him as the Eye of Sauron, the famed gigantic flaming eyeball that gazes over Mordor.

“Maybe I’m not strong-willed enough or calm enough to do just straight-up meditation,” Zuckerberg said during an appearance on The Tim Ferriss Show. “I actually need to put myself in a situation where it’s difficult to not focus on that thing.”

“Some of the folks I work with at the company — they say this lovingly — but I think that they sometimes refer to my attention as the Eye of Sauron. You have this unending amount of energy to go work on something, and if you point that at any given team, you will just burn them.”

While I’d hate to speak for the Zuck of Meta, it’s difficult for me to imagine how being nicknamed the “Eye of Sauron” — which effectively serves as the literal symbol of evil in one of the most famous stories in modern human history — is remotely “loving.”