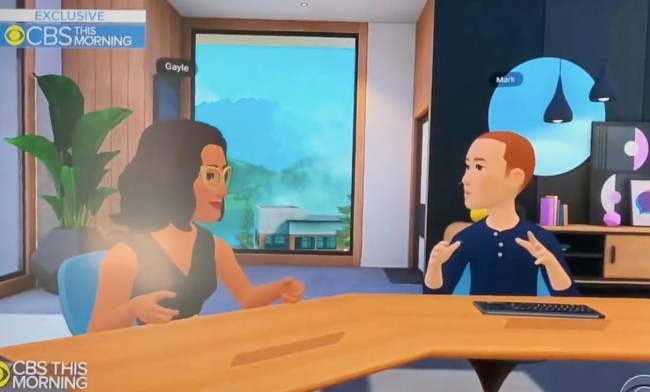 Check it out, y’all, new portal to hell just dropped! Just days after the horrifying new state of consciousness was released, too. “Would you like some simulation to pair with your simulation, sir? Make it a Simulation Happy Meal?” How lucky are we?

Look, man… I don’t want to be the bearer of bad news, but in case you haven’t looked outside lately, it would appear that the world is ending. I used to half-joke that my grandkids would see the end of days but now I somewhat unironically believe I might actually be the one with the ticket on humanity’s Titanic. All of the doomed fate yet barely a quarter of Leo DiCaprio’s looks. And nothing convinces me of that fact more than whatever the hell Mark Zuckerberg is cookin’ up in his spaceship. Ginger E.T. a.k.a. Silicon Valley Walter White got tired of trying to figure out how to interact with human beings so he figured, “Screw it, let’s all interact as cartoons instead. I’ve seen The Matrix before. What could possibly go wrong?”

This reminds me of the time on Game of Thrones (RIP) that Tyrion said if you’re looking for justice in King’s Landing, you’ve come to the wrong place. Well, folks, if you clicked on this article for reassurance, I’m not going to be the one to give it to you. Things are lookin’ pretty dicey for ole mankind these days. I can barely wrap my head around Bitcoin and NFTs, and now here’s Zuckerberg trying to turn reality into The Sims. Plus, dropping this new look at the “virtual metaverse” just weeks after the massive success of Free Guy? To quote Mr. Incredible’s mustached and balding boss, “Coincidence? I think not!” Don’t get me wrong, Ready Player One was awesome, and in a vacuum, this technology is objectively cool — I’ve been WAITING for the video game that literally allows me to be Batman. The issue, of course, is not so much the what, but the who — there is no WAY I’m letting Zuckerberg take me to a second location, virtual or otherwise.

RELATED: Latest Boston Dynamics Robot Video Is, By Far, The Most Thoroughly Chilling One Yet