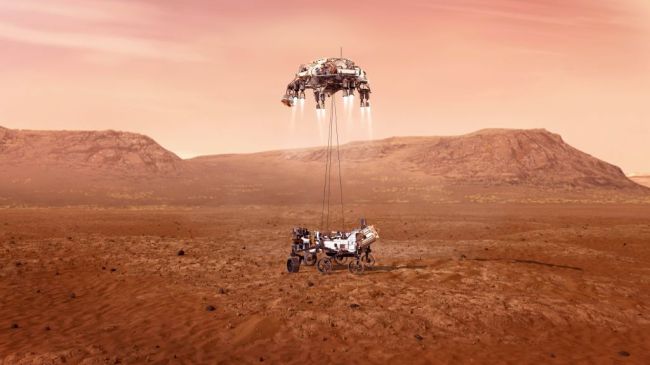 In case you’ve been living under a space rock, NASA landed a rover on Mars last week. The USA’s mission is seen as a first step toward bringing samples of the Martian surface back to Earth with a larger goal of determining whether life might be sustainable on the planet.

After launching from Earth on July 30, 2020, the ‘Perseverance’ touched down safely at exactly 3:55 p.m. ET on February 18, 2021. NASA released video on Monday that chronicled the landing from the rover’s perspective. The multiple high-definition camera system covers the entire descent and shows the tense make-or-break final moments. It begins with the supersonic deployment of the most massive parachute ever sent to another world and ends with the rover’s wheels touching down successfully on the red planet. It’s truly wild.

This is what it looks like to land on Mars from the Perseverance’s perspective 🤯#CountdownToMars #Mars2021 pic.twitter.com/p9jBnWcXaN

The video of Perseverance’s descent is the closest you can get to landing on Mars without putting on a pressure suit and flying out there yourself. It is the first video of its kind sent back to earth from the planet and can’t be undersold. It’s a huge deal. In addition to the video, the rover sent back audio from its first few days, giving you a peak into what it sounds like 128 million miles away. Insane.

Now that you’ve seen Mars, hear it. Grab some headphones and listen to the first sounds captured by one of my microphones. 🎧https://t.co/JswvAWC2IP#CountdownToMars

The six-wheeled rover is about the size of a sedan and the duration of the mission is set for one Martian year, or 687 days on Earth. In addition to collecting samples of the planet’s surface, Perseverance will collect data on the planet’s geology and climate — with hopes of paving the way for eventual human exploration. It will also conduct and experiment to determine whether it is possible to manufacture oxygen in the Martian atmosphere.