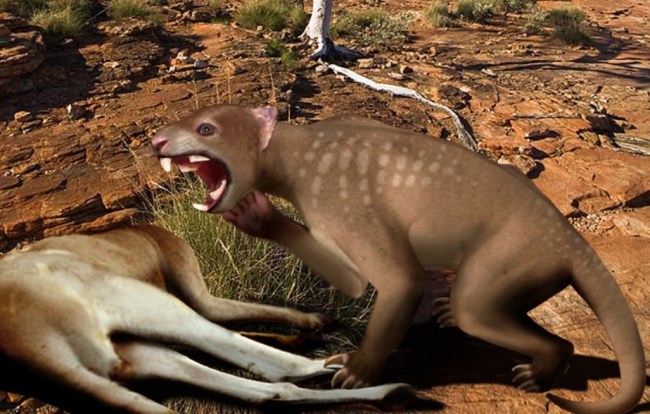 Researchers have discovered fossils of a flesh-eating marsupial lion that lived some 19 million years ago in Australia because where else would a marsupial lion live? Scientists from the University of New South Wales found 19-million-year-old fossils in the Riversleigh World Heritage Area of north-western Queensland. The new species of half marsupial, half lion was named “Wakaleo schouteni” in honor of wildlife illustrator Peter Schouten.

The fossils from the extinct animal included a nearly complete skull, teeth, and upper arm bones. “It is very rare to get a complete skull of a marsupial lion that is this old, so this specimen is a real treasure,” says Dr. Anna Gillespie from the University of New South Wales in Sydney, lead author of the paper that was published in the Journal of Systematic Palaeontology. The prehistoric creature had large blade-like teeth to tear up prey that was abundant in Australia’s then rainforests. The lion would have hunted lizards, birds, frogs, and small possums. The lion’s teeth suggest that it may have also eaten small servings of vegetables.

.@UNSW scientists say the discovery of a marsupial lion skull in North West Queensland has changed what they knew about the ancient species. They say the Wakaleo Schouteni was a dog sized, tree-climbing animal that lived 18-million years ago. pic.twitter.com/Ww8M1j4Ees

The Wakaleo schouteni lived 18 to 26 million years ago in the late Oligocene to early Miocene era. The carnivore marsupial lion was approximately 50 pounds and as big as a dog. The new species pales in comparison in size to the largest and last surviving marsupial lion, Thylacoleo carnifex, which weighed about 280 pounds and roamed the continent up until 40,000 years ago. The marsupial lions are the largest meat-eating mammals ever to have existed in Australia.

The discovery comes only one year after scientists found the fossilized remains of a marsupial lion on the same Queensland excavation site. However, that marsupial lion was only the size of a kitten and that species was named “Microleo attenboroughi” after wildlife broadcaster Sir David Attenborough. Even millions of years ago and still true today, Australia always gets the coolest animals.