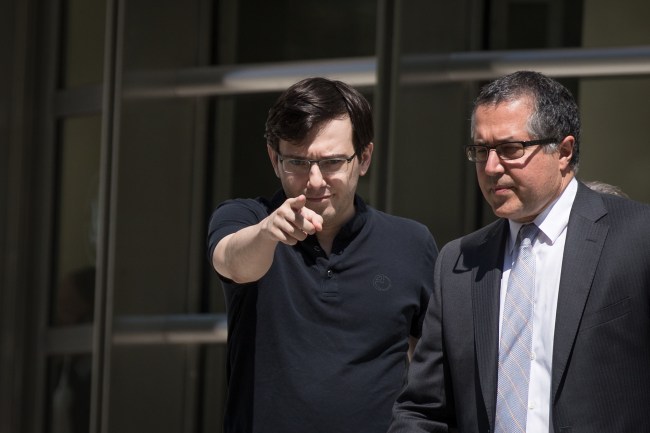 The man once dubbed ‘the most hated man in America’ before Billy McFarland became the hot new douche is now known as Inmate 87850-053. Or “Asshole” by his fellow prisoners.

Martin Shkreli is 16 months into his 7-year federal prison sentence for securities fraud and officials at the cushy Fort Dix, New Jersey prison may have to consider moving him to more spacious digs. He is simply becoming too swole for his 12-person prison cell.

In an extensive Wall Street Journal piece that dropped Thursday, the 35-year-old seems to be adjusting quite seamlessly to prison life. He’s reportedly seeing a prison therapist and has taken on the job of caring for prison cats and “occasionally argues with his cellmates about proper grammar.”

He’s also been attempting to re-brand into something of an intimidating physical specimen. Shkreli is reportedly bulking up in prison and plans to jumpstart a new weightlifting regiment. Reports indicate that he can now do 15 push-ups in a row.

Mr. Shkreli reads about research into fatty acids and the prevention of cardiovascular disease in the inmate computer lab or on his phone. He cuts his own hair with safety scissors and is growing a patchy beard. The low-security federal correctional institution is built on the grounds of an old army base about 90 minutes from Mr. Shkreli’s former multimillion-dollar Manhattan penthouse.

Shkreli, armed with nothing more than a contraband smartphone, is reportedly running his disgraced pharmaceutical company under a new name from the comforts of a prison cell. Pharma douche stills “calls the shots” at Phoenixus AG, the company that was birthed from the death of Turing Pharmaceuticals after Shkreli price-gouged AIDS patients, among others.

I can’t bring a cell phone into jury duty but Martin Shkreli can use one to run a company from prison.

According to the report, a few weeks ago he called up his chief executive during a safari vacation with his new fiancee to fire him after the dude asked for a seven-figure pay increase.

Shkreli is reportedly aiming to leave prison “richer than he entered.”