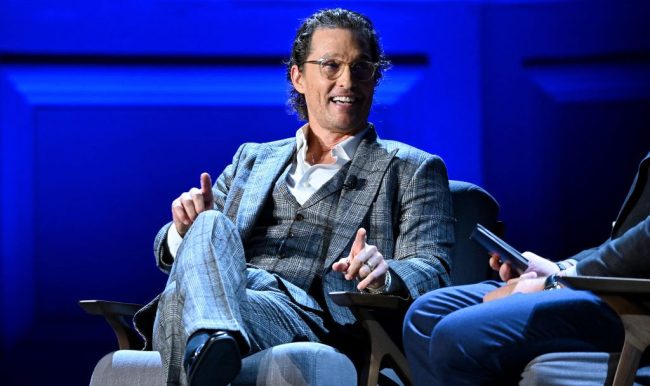 Matthew McConaughey becoming the Governor of Texas feels like something of an eventuality at this point. While I certainly don’t speak for Texas, from the outside lookin’ in, it feels like momentum is building — momentum aided by the fact that McConaughey himself has certainly not shied away from the discussion. For as much as The Rock *talks* about thinking about running for President of the United States, it’s my personal opinion that McConaughey is *actually* considering running for Governor of Texas. He just strikes me as the type of guy who likes not only a challenge but relishes a new experience. And not only an experience, but an experience that puts him in a position to help his compatriots.

So perhaps, then, that explains the 51-year-old Academy Award winner’s “Just keep livin'” themed messaged to current Governor Greg Abbott, who tested positive for the virus over the weekend (Abbott is now testing negative and is crediting the vaccine).

Responding to Abbott’s tweet, McConaughey thanked Abbott for mentioning the benefits of the vaccine before signing off with a classically McConaughey “mask, vax and just keep living.”

Glad you’re now testing negative for Covid Governor Abbott. Thank you for mentioning that “the vaccination you received made your infection brief and mild.” Health to you, Cecilia, Texas, and beyond. mask, vax and just keep livin, mcconaughey https://t.co/yFOJRlf4Mw

The next Texas gubernatorial election will take place on November 8, 2022 — about 14 months from now. If McConaughey does decide to run, it’ll probably be before the end of the year. While I’m certainly not a political expert, I am a semi-professional when it comes to movies, and in terms of McCon’s acting career, it’s certainly an interesting time to do it. Sure, he’s in his 50s now, but the man remains in amazing shape and will likely be offered A-list roles for the next decade or so if he chooses. Just look at Keanu Reeves, who’s five years McConaughey’s senior and is still whooping ass in the John Wick films. The dude will be pushing 60 by the time John Wick 5 comes out. If I was McCon, I’d squeeze a few more years out of my A-list status and take a swing at the 2026 or 2030 race. But that’s just me — you just keep livin’ Matthew, I’ll love ya either way.