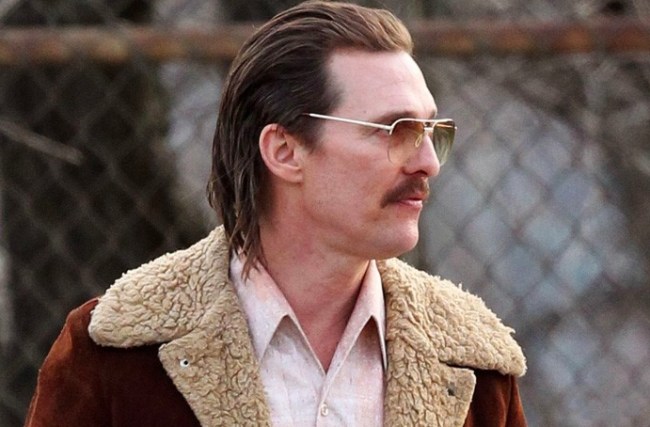 A mustached and mulletted Matthew McConaughey starring in a true story set in the crazy ’80s–can I get tickets off Fandango like now?

White Boy Rick is the story of 14-year-old Rick Wershe Jr. (played by newcomer Richie Merritt), who convinces his father (McConaughey) that dealing drugs and turning informants for the FBI will help catapult them out of generational poverty.

The trailer is an experience. Check it out below.

You had me at “Lions don’t leave the Serengeti.”

For those who would like go into the movie without any superficial knowledge of Rick Wershe Jr.’s real-life backstory, I will you just tell you that it’s an unbelievable  life path for anyone, nevermind a teenage kid.

For the rest of you, Wershe was railroaded by the Michigan’s 650-Lifer Law after he was arrested for selling cocaine in 1987. Via The New Yorker:

Wershe was sentenced under arguably the most merciless drug statute ever conceived in the nation, Michigan’s so-called 650-Lifer Law, which, at the time, mandated a term of life without parole for possession of more than six hundred and fifty grams of cocaine or heroin. (Not even the Rockefeller laws ruled out parole for a one-time drug offense.) The Michigan statute was amended in 1998, to give judges some leeway and to retroactively allow for the possibility of parole.