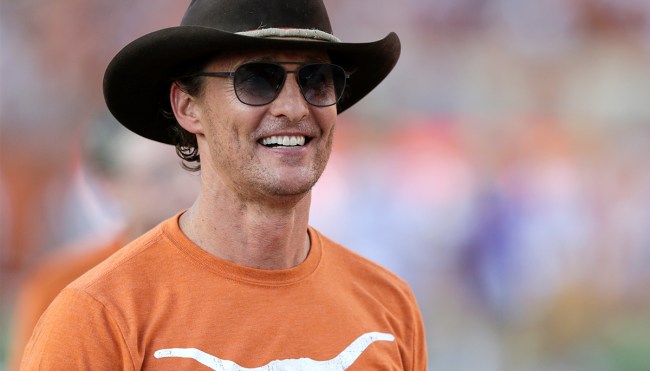 In the early 1990s, an aspiring actor named Matthew McConaughey caught the eye of director Richard Linklater before earning the right to portray the joint-loving Wooderson in Dazed of Confused.

Prior to that point, the most notable gig McConaughey had landed had been a Trisha Yearwood music video, but he was soon able to leverage that breakout role into major parts in movies like Contact and Amistad before entering the Primary Love Interest in Romantic Comedies Era of his career around the turn of the millennium.

The native of Uvalde, Texas spent around a decade resigned to that fate before deciding it was time to become a Serious Actor. When the 2010s rolled around, he impressed audiences and critics alike with the impressive performances in movies including Interstellar, The Wolf of Wall Street, and Dallas Buyers Club (the last of which earned him an Academy Award for Best Actor)—a pivot that kicked off what is frequently referred to as the “McConaughnessance.”

McConaughey has scaled back his entertainment output a bit over the past few years, but after establishing himself as a much-needed voice of reason at the start of the pandemic, he turned his attention to a new realm: the world of politics.

Back in March, the actor said he was entertaining the notion of running for governor of Texas. While he’s yet to officially throw his hat into the ring for the election that will take place on November 8, 2022, it seems like his chances of securing the top office in the state are more than alright, alright, alright based on some new numbers.

According to a poll of over 1,000 registered voters that was recently conducted by the University of Texas and the Dallas Morning News, McConaughey would top Republican Greg Abbott if the two men went head-to-head, as 43% of respondents said they’d vote for the actor compared to the 35% who’d cast a ballot for the incumbent governor (it’s worth noting 22% would opt for another option).

His advantage is even greater in a hypothetical matchup with Beto O’Rourke, as McConaughey leads that race by a margin of 47%-29% (it’s also worth noting there’s no realistic scenario where those would be the only two candidates, and if all three men ended up running, the actor would end up in the basement with Abbot emerging on top).

McConaughey hasn’t aligned himself with a particular political party and has never donated to any candidates on either side of the aisle, and based on what we know about his views, he’d be toeing a decidedly centrist line if he did decide to enter the governor’s race.

It’s also hard to imagine the famously chill actor would willingly choose to subject himself to that particular line of work, but stranger things have certainly happened.